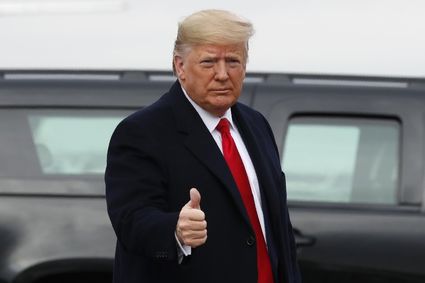 President Donald Trump makes the thumbs-up sign as he exits a motorcade to board Air Force One at Andrews Air Force Base in Maryland, Saturday, Dec. 14, en route to Philadelphia to attend the Army-Navy football game. AP Photo/Jacquelyn Martin photo

President Donald Trump made clear Monday that he intends to participate in at least three general election debates, but he is threatening to sidestep the nonprofit group charged with running them.

"I look very much forward to debating whoever the lucky person is who stumbles across the finish line in the little watched Do Nothing Democrat Debates," Trump tweeted Monday morning, Dec. 16, after The New York Times reported that he was considering skipping them entirely.

Trump said his record "is so good" that "perhaps I would consider more than th...