Myrtle Creek closes its doors to the public 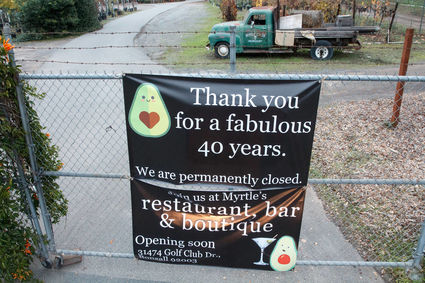 Myrtle Creek Botanical Gardens & Nursery, a Fallbrook landmark settled in the late 1800s which had been transformed into one of Fallbrook's hidden gems, recently announced it would be closing its doors to the public.

"It has been a fabulous & successful 40 years," a statement on Myrtle Creek's website said. "Thank you so much for your support over those years. We have made the difficult decision to close our gates to the public."

The statement goes on to read that the facility will continue to operate its farm and growing grounds for wholesale trees and shrubs. The ownership group went to dispell any rumors that they are selling the property to developers "or anyone else."

Locals and visitors to the area loved to visit the business situated amongst an oak forest and featuring a clear-running, spring-fed stream that flows year-round through the compound that helps to feed the full nursery business and gardens.

The business was a popular meeting spot and featured a small bistro on the grounds. Photographers flocked from all over Southern California to shoot at the location.

When contacted for comment, Myrtle Creek's Marketing Director, Kevin MacGregor explained some of the factors that went into the decision to close.

"The elders in the family still live on the property, they're retired," MacGregor said. "They never left - they've been there since 1976. (That) didn't factor into the decision because nothing changed in that sense.

"Some of the factors were that we've had 40 fabulous years, in 1979 we started as a roadside stand, and we grew and grew - we found that a few of our neighbors complained and didn't like the traffic impact on the neighborhood," he said. "The private and internal factors that showed us the way included the loss of our general manager, beloved father, and grandfather."

MacGregor is referring to the passing of Bill Goodson.

"He is deeply missed," he said. "He was one of the kindest and most insightful people I've ever had the privilege of knowing."

MacGregor also explained the sudden closure of the facility.

"We felt that since the neighbors were already concerned about the traffic that if we had done a send-off weekend it could've made things worse," he said. "We wanted to be remembered fondly. We didn't want to take what the community was complaining about already and make it worse."

"Thank you," he said to Myrtle Creek fans. "It was our sincere pleasure to serve them and we view each one like family - we appreciate them allowing us a graceful exit. We hope that we live in their hearts, in memories and photos because they live in ours."

Signs posted outside the business' gates suggest that the public should visit Myrtle's Restaurant, Bar & Boutique at the former location of San Luis Rey Downs Golf Club in Bonsall.

The plans for Myrtle's Restaurant, Bar & Boutique were announced back in October 2018 and had expected to open earlier this year. The new facility is not open officially, but MacGregor said they will be opening "within days."

"In December 2019 we started private soft opens with menu tastings for entrees, share-plate desserts, and cocktails," he said. "We are putting the final touches on the gift shop. The entire property will be open by the end of January."

MacGregor is excited for people to see what they've done to the building and the services they will offer.

Myrtle Creek has plans for the 23-room hotel on the property as well.

"Our 26 room boutique hotel and gathering spaces for weddings and events are also coming soon," MacGregor said. "It has received a fresh new remodeling inside and out, and we're excited to open soon. Our design team has been working tirelessly on this property since day one and we're so excited to share."

He wanted to thank the new neighbors in Bonsall, as well.

"They've been so kind and supportive that we're bringing the property to its former glory and beyond," MacGregor said.