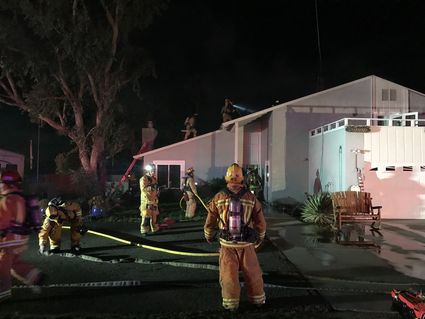 Fire damaged the roof and attic of a Fallbrook home early Wednesday morning.

FALLBROOK (CNS) - A resident was displaced today after a fire damaged the roof and attic of his Fallbrook home, authorities said.

The blaze was reported shortly after 10:35 p.m. Tuesday at a home in the 1800 block of Gum Tree Lane, according to North County Fire Protection District spokesman John Choi.

Crews responded to the scene and found flames coming from the roof of the two-story house, Choi said.

Firefighters from the Oceanside and Camp Pendleton fire departments helped knocked down the flames within 30 minutes, but the fire caused damage to the roof and attic, he said.