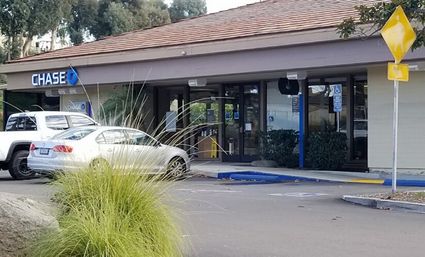 Chase Bank in Fallbrook was robbed Friday, Dec. 27, at roughly 1:30 p.m. by a white male wearing a white, curly wig.

San Diego County Sheriff's Department deputies and investigators are searching for a man who suspected of robbing Chase Bank in Fallbrook Friday, Dec. 27, just after 1:30 p.m.

According to Lt. Amavisca, a white male between the ages of 55-65, wearing gray slacks and shirt with a black tie with a white, curly wig on his head, walked up to a teller at the bank and presented a demand note.

No weapon was used, and no estimate was given on how much money the suspect made away with.

The department said the suspect could be bald and is about 5-foot-10 with a slim build.