Four displaced after fire breaks out in garage of Fallbrook home 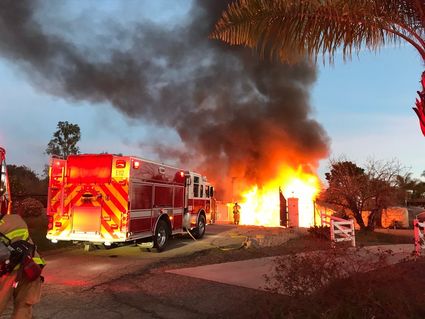 FALLBROOK (CNS) – Four residents were displaced Tuesday, Jan. 7, when a fire broke out in the garage and damaged part of their Fallbrook home, authorities said.

The blaze was reported shortly before 6:30 a.m. at a home in the 2000 block of Pomegranate Lane, off South Stage Coach Lane north of Fallbrook Union High School, according to North County Fire Protection District spokesman John Choi.

Firefighters from the Oceanside and Camp Pendleton fire departments responded to the scene along with Cal Fire San Diego personnel to help douse the blaze, which fully...