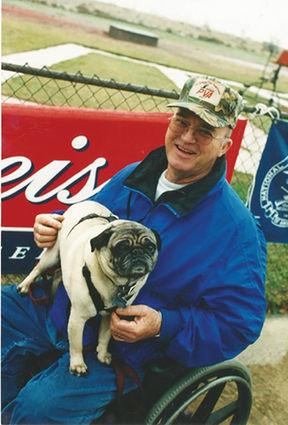 Jim was born and raised on a farm in western Pennsylvania. In 1959, he married Linda Master; they had five children together. During 20 years in the Marine Corps Jim developed some of the initial computer programs for paying Marines, completed two tours of duty in Vietnam and commanded a Marine detachment on board a nuclear-powered guided missile cruiser, retiring as major after serving as enlisted and warrant officer.

A motorcycle accident in 1977 left him paralyzed from the waist down. In 1978, Jim married his second wife, Barbara, later earning bachelor's and master's degrees in business and creating Russell Family Farms where they raised macadamias.

Jim was president of the California Macadamia Nut Society, founding member of the Art Center of Fallbrook and sat on the Fallbrook Community Planning Group and board of directors of the Paralyzed Veterans of America, both nationally and locally.

In 2019, Jim received the highest honor bestowed by the Paralyzed Veterans of America – the Speedy Award, in recognition of his many contributions to improving the lives of America's paralyzed veterans.

Funeral services with full military colors will begin at 4 p.m., Sunday, Jan. 26, at The Grand Tradition, 220 Grand Tradition Way in Fallbrook. A reception will immediately follow the service.

In lieu of flowers, donations may be made to the Cal-Diego Chapter of Paralyzed Veterans of America at (800) 423-2778.