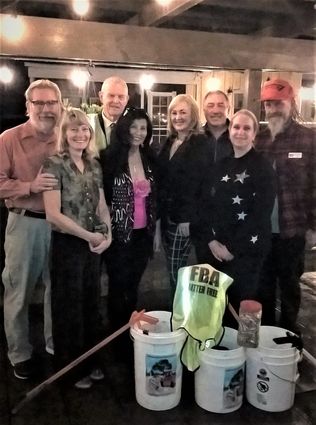 FALLBROOK – "It was an honor to thank Marta Donovan for her work bringing the community together through our Community Collaboration award," Nik Kennedy of I Love a Clean San Diego said.

The award honors partnerships between nonprofits, municipalities, residents and corporations that support ILACSD's mission. Donovan, Fallbrook Beautification Alliance board member, graffiti abatement coordinator and Keeping Fallbrook Litter Free coordinator, was selected for the award in November 2019 after a full year of building partnerships within North County.

Early in 2019, Donovan brought ILACSD together with FBA to promote a new program, Keeping Fallbrook Litter-Free, which was in itself a collaborative effort between FBA, local residents and business stakeholders.

Later in the year, Donovan expanded the group's reach by working with representatives in both De Luz and Bonsall. Through her efforts, FBA collaborated with Lyssa and Jack Flaherty of Flaherty's Charities in Bonsall and Julie and Jean-Luc Annet who started Keep De Luz Beautiful and longtime Adopt-A-Road volunteers Joe and Rosemarie Beyer.

The efforts allowed us to "create a fantastic partnership network, and through the hard work of these individuals build our volunteer network and bring more members of the community to make an impact on the North County region" Kennedy said. Sixteen group cleanups where held in 2019 in and around Fallbrook.

"Partnering with our neighbors to the North (the DeLuz Team) and the South (the Bonsall Team) is a wonderful opportunity to protect our watershed in a collaborative volunteer effort," Donovan said.

Following on the heels of Keeping Fallbrook Litter Free program, the Annets started a Keep De Luz Beautiful initiative and in early 2019 presented a signage program to the De Luz Community Services District to raise awareness about littering and dumping. Signs were approved and installed in 2019 around De Luz.

"While the signs alone won't stop everyone from littering, if they give even a small percentage of the people that litter pause and stop them from doing so, they are having a positive impact," Julie Annet said. "The initiative was started with a desire to protect and beautify our community by removing trash and debris from our streets and surrounding wilderness. We have volunteer events and also receive trash pickup services from the Riverside County Department of Waste Services, through the assistance of our county Supervisor Kevin Jeffries."

Jack and Lyssa Flaherty have been Bonsall residents since 1969, and run seven local not-for-profit organizations. Each one focuses on community service, local youth, local arts and healthy activities. They chair Flaherty's charities: the Miss Bonsall Pageant, the Bonsall Community Foundation for the Arts and the Vista Skatepark Coalition, to name a few.

The Flahertys are the Bonsall site captains for the annual ILACSD Creek to Bay Cleanup and Coastal Cleanup Days. In addition, they have added three additional Bonsall Community Cleanup Days to the calendar each year. Miss Bonsall and the Watershed Warriors, along with ILACSD, clean Old River Road from the Bonsall Community Church to the historic Old Bonsall Bridge. Part of the Miss Bonsall platform each year is "I Love a Clean Bonsall."

"We are honored to be partnering with Marta Donovan and the Fallbrook Beautification Alliance and to work alongside Commander Joe Beyer and his Support Bonsall/Fallbrook Team" Lyssa Flaherty said. "Joe has been so supportive of our Cleanup Days, and has twice won our 'Star Volunteer' award with the highest trash weight.

"We all share a similar vision of keeping our local community litter free, and look forward to participating in each others cleanup efforts," she said.

Joe and Rosemarie Beyer have been cleaning up South Mission Road from Bonsall River Village to Valley since mid-2013. Official "adoptees" of this important roadway, the Beyers recently added Route 76 from the Bonsall Bridge to Olive Hill Road.

Residents will often see Joe Beyer cleaning up trash along these key roads and might also notice both County and Cal Trans signs posted reading "Support Bonsall and Fallbrook Team." Beyer consistently supports cleanup, recycling, graffiti removal and adopt-a-road programs throughout Fallbrook and Bonsall leading the way at each event.

Each of these groups host cleanups throughout the year. FBA's Keeping Fallbrook Litter Free is very thankful for the 71 volunteers, which together have cleaned up 4,469 (5-gallon) bucket equivalents of litter and illegal dumping and contributed 2,589.75 hours of volunteer time.

Through this program, everyone can make a difference beautifying the Fallbrook community, abating graffiti and litter along the streets and divert litter from the waterways. 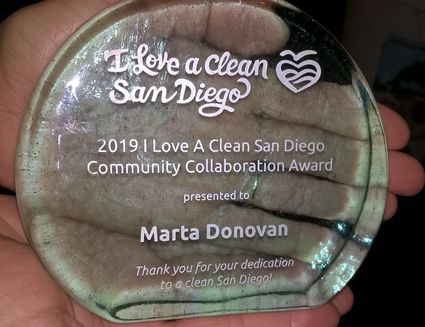 This is the Collaboration Award presented to Marta Donovan of Fallbrook Beautification Alliance.