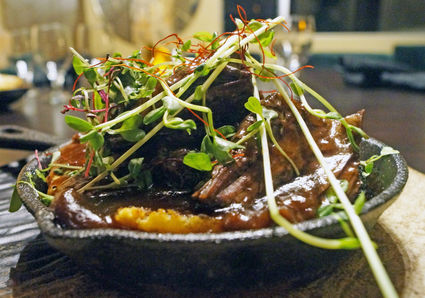 Short rib cornbread is one of the starters at Harlow's Cocktails, Bar and Restaurant in Bonsall. Village News/Jeff Pack photo

It has been quite a while since the announcement of a new restaurant coming to one of our cherished rural communities was met with such big expectations.

Harlow's Cocktails, Bar and Restaurant seems poised to surpass them.

At the very least, it would be fair to say there's nothing that compares to it within 30 miles, and the chances are good that the swank, but familiar restaurant won't stay hidden in Bonsall for long.

Located at the former San Luis Rey Downs Golf Club, Harlow's is the brainchild of the owners of Trademark Venues, a wedding and events company that was part of the team at Myrtle Creek Botanical Gardens and Nursery in Fallbrook before its closing.

Diners who ever visited the bar and restaurant when it was operated by San Luis Rey Golf Club will immediately remember the layout of the space.

The difference is the way the Trademark team uses the space and the overall design and decor. It feels like the old SLRD, but with a Roaring Twenties twist with unique usable pieces incorporated into the design and flare dispersed throughout.

Instead of going over the top with period decor, they infused just the right amount to make everywhere you look interesting and inviting.

While dining at night, the restaurant is best observed and the ambiance is at its most effective.

The low light coupled with pops of muted colors in prints and wall murals gives diners a vintage feel that is hard to find these days.

The kitchen is led by Executive Chef Joe Dacy, who serves as chef for all Trademark Venue properties and developed the menu for Harlow's.

According to Trademark, Dacy is known for his gourmet sauces and use of applewood chip smoker infusing a smoked essence into his dishes.

Once seated, the plentiful and attentive staff, led by general manager Ronald Prestage, are friendly but serious about creating an atmosphere and experience for each guest.

The meal started with a plate of jalapeno cornbread with a dollop of brown sugar and Himalayan salt-infused butter that was not overpowering and complimented the bread well.

Next, the server brought shrimp aguachiles, $14, shrimp and chorizo egg rolls, $15, and short rib cornbread, $13, as starters. The aguachiles lacked a kick and personality, but the egg rolls and short rib were really well presented and delicious to the very last bite.

While waiting for the entrees to arrive, we ordered a myrtle berry martini, which was fruity but didn't overpower the drink as well. Prestage assured us that the myrtle berry margaritas were just as tasty.

The short rib was tender and juicy and the au-gratin potatoes stole the show, doused with chive oil as well.

The second entree was the elk meatloaf, $24, that was made with ground elk, bison and chuck and a blend of mirepoix fresh herbs and wrapped in bacon. It was served with Harlow's mashed potatoes and chanterelle gravy with rainbow carrots and roasted tomatoes.

To say the meatloaf was outstanding would be an understatement. The potatoes and garnishments were equally delicious, as well.

For dessert, our server first delivered a bananas Foster cheesecake that was light, fluffy and filled with flavor. It was tremendous and left us wanting more.

Bright and vibrant, it was the most accurate representation of the flavor power that Harlow's can wield over its guests and ultimately very satisfying.

The menu features a good array of appetizers, called shareables, with everything from truffle fries, $10, to short rib poutine, $14, to crispy lobster pot stickers, $16, and, of course, locally sourced guacamole served with a choice of polenta or taro chips.

During the meal, we sampled Dacy's New England seafood chowder, offered in either a cup, $7, or a bowl, $12, and it lived up to the hype. Flavorful and not overly fishy, it was authentic and filling. 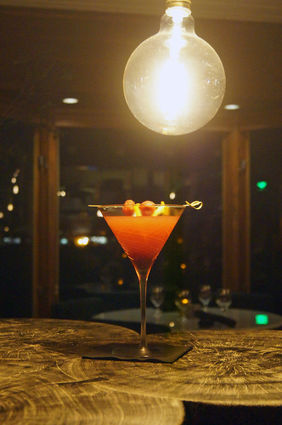 In addition to the myrtle berry, you can get green garden, $15, Nutella, $13, and free-range chicken and Fallbrook avocado, $15, crepes.

Sandwiches include the smoked tri tip, $13, short rib, $15, crispy buttermilk chicken, $15, and the lobster grilled cheese, $19. The smashed avocado and barbecue burgers go for $17 each.

In addition to the short rib Provencal and elk meatloaf, entrees include chicken Kiev, $23, and ginger-miso glazed salmon, $32.