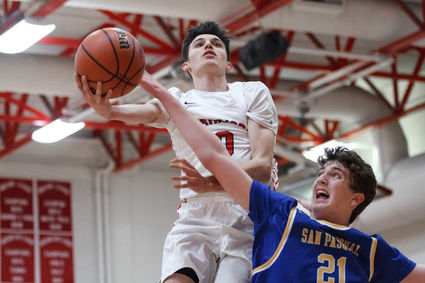 The fact that Fallbrook High School's varsity boys' basketball team is 13-6 as of Monday, Jan. 27, is an accomplishment in itself for head coach Ryan Smith.

With only one win in all of the 2018-2019 season, the Warriors are not only far exceeding expectations but doing well to hang tough in the Valley League with a 1-3 record, which includes a three-point loss last week.

If a few more shots had gone down for the Warriors on the road Friday at Mission Vista High School, the Warriors could be 2-2 in league. Instead, the 73-70 loss dropped the Warriors below the .500 mark.

Calhoun poured in 26 points Jan. 17, and the Warriors tried to overcome a steep lead by Ramona High School heading into the fourth quarter, but came up short, losing 67-57 on the road. Villagran chipped in with 11 points and Sherman was held to 7 points in the contest.

On Jan. 14, the Warriors fell to Escondido High School 64-48. Calhoun and Sherman were held to 21 and 16 points respectively with Sherman making four three-pointers in the game. Zach Allegro, Steve Fuentes and Villagran scored two points each.

The Warriors were scheduled to battle Valley Center High School at home Tuesday, Jan. 28, after press time and will play host at 7 p.m., Friday, Jan. 31, to Escondido High School, looking for payback.

Their third home game in a row finds the Warriors looking for redemption against Ramona Tuesday, Feb. 4. They will take on Valley Center on the road Friday, Feb. 7.

Unfortunately, the team came up on the short end of a 55-54 game on the road. The Legionnaires trailed early, came back in the second quarter and tied the game in the third before being outscored 8-7 in the final frame.

"Our team for sure, night in and night out, plays hard, no matter if we win or lose," Colletti said. "Each player puts in a total effort."

Overall, Bonsall High School has a 6-9 record and sits at 2-4 in league.

The Legionnaires were riding high coming into the game after easily dispatching Coastal Academy 56-37 on the road Wednesday, Jan. 22.

"Bonsall really needed a game like this since we broke our four-game losing streak," Colletti said.

Rahman led the team with 15 points, eight assists and six steals, Robillard and Emil Watkins also had 15 to lead the Legionnaires.

On Jan. 13, Bonsall came up short against Health Sciences High School dropping a 69-47 decision on the road. Nate Velara led the team with 9 points and Tyler Hammer grabbed 9 rebounds in the loss.

"Our team has been running through a tough stretch right now losing the last four in a row," Colletti said at the time. "Our team plays hard every night and it is a fun team to watch." 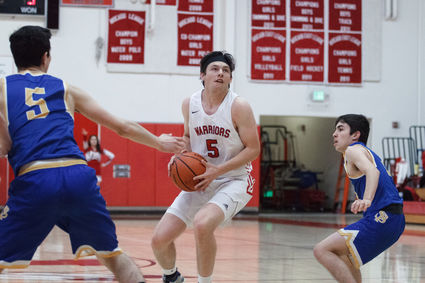 Warrior Zach Allegro looks for an opening for a shot against San Pasqual High School.