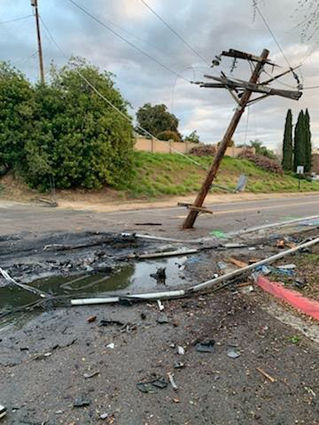 This damaged power pole is the cause of the power outage around Fallbrook High School Monday, Feb. 3.

The crash happened around 1:07 a.m., according to information from California Highway Patrol spokesman Mark Latulippe.

A 13-year-old child driving a parent's car crashed on Stage Coach Lane near the high school, and the car burst into flames, Latulippe said.

The child was taken to Rady Children's Hospital with minor injuries, and was also cited for driving under the influence.

The crash knocked out power to about 45 utility customers, including the high school campus.

Fallbrook Union High School District Superintendent Ilsa Garza-Gonzalez said in an email to parents Monday morning that classes are canceled at Fallbrook High, as well as Ivy High School and Oasis High School, which are located on the same campus.

"We have limited access to the school," Garza-Gonzalez's email said. "Please do not attempt to come to the school at this time."

Power was restored by Monday evening, according to San Diego Gas and Electric's online outage map.