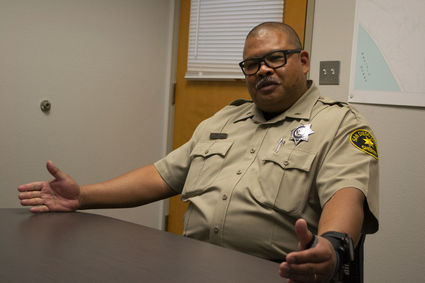 Lt. Arnold Aldana has been running the Fallbrook Sheriff's Substation for a little over a month now.

He has more than two decades in law enforcement experience now, but being the boss is something that always has its challenges.

"It's nerve-wracking," he said. "Even though I've been in law enforcement for 23 years, you aren't really fully ready to do that. You're the guy, so all eyes are on you, whether it's from the public or from your department, all eyes are on you."

That's not to say he doesn't think he's up for the task.

At the very least, he's as ready as anyone could ever be when handed the task of leading an entire substation. In the 23 years he's been with the San Diego Sheriff's Department, he's done a lot – everything from patrol to detective work.

Originally, he was working in construction. But, he said, he knew once he got married that it wasn't a long-term option.

"I was working every day, it provided for myself," Aldana said, "but it wasn't gonna provide eventually if I had a family."

But he couldn't just go straight to being a patrol deputy – he had to do something else first.

"I did three to four years in jail," Aldana said.

"I started in the jails as a CD, a correctional deputy," he said.

His very first assignment was at the old Central Detention Facility in downtown San Diego. That jail doesn't exist anymore, having been replaced by San Diego Central Jail in 1998.

Aldana said he didn't want to be working in the jails forever, but he his wife was reluctant to agree to him working on the streets. A lieutenant of his was eventually able to convince her it was the right route, and Aldana went to a law enforcement academy. But once he graduated, there weren't immediately any openings, and Aldana had to do more time as a correctional deputy, this time at the new central jail and at the George Bailey Detention Facility in Otay Mesa.

Then, finally, he got assigned to patrol out of the Santee Sheriff's Station. He was there for a while before a position opened up in Fallbrook - so his new gig as lieutenant of the Fallbrook substation is not his first time here.

"My wife and I, we had a family (by that time), and we moved out to Riverside County, where you can get a much bigger house for a lot less money. At that time, I was commuting but an opening in Fallbrook happened," Aldana said. "I was able to transfer to Fallbrook, and at that time I was also temporarily assigned to street narcotics and gangs."

After that, he said, "my career just took off."

He bounced around investigator assignments at different stations, ending up working across the county as part of a three-member FBI task force, helping to investigate federal crimes like bank robberies with detectives from the San Diego and Chula Vista police departments.

"That was probably one of the best jobs I've ever had, truthfully," Aldana said.

But all good things must come to an end, and Aldana soon decided he needed to promote. And so, he did, and ended up doing time as a sergeant at sheriff's stations in Encinitas and Vista. His first assignment as a lieutenant was at the Sheriff's Communications Center, overseeing dispatch operations and, occasionally, fielding phone calls from reporter – a Google search reveals that his first interaction with this particular journalist would have been releasing information on such exciting news as a taco shop fire in Vista back in November 2018.

And now, he replaces Lt. Rick Lopez as Fallbrook's effective chief of police.

Many Fallbrook residents cite homelessness and vehicle burglaries as two of the community's biggest public safety problems, and Aldana agrees.

Of course, those aren't issues that are just limited to Fallbrook, and there's no easy answer to either.

"A lot of times, our hands are tied," Aldana said. "If we can get them (shelter), we try to do that, but sometimes they just don't accept it, and that's the uphill battle really, for them to get the resources and really accept it."

But Aldana said he and his deputies will do their best to give back to this town.

And while lieutenants do frequently transfer stations, Aldana said he hopes to be in Fallbrook as long as possible.

"The people are great, it's overall a great community, it really is," he said. "It's a hidden gem."