Alvarez, Calloway, Jesus, Gomez honored as Students of the Month 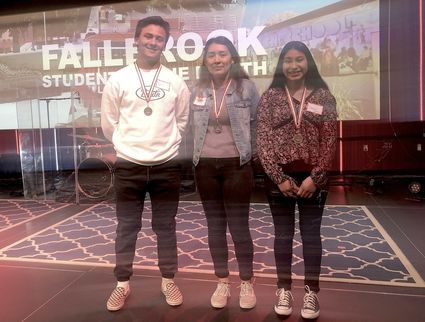 From left, Dru Calloway, Jacqueline Alvarez, Regina Jesus and Araceli Gomez, who is not pictured, were honored at the Fallbrook Student of the Month breakfast at North Coast Church Thursday, March 5.

Alvarez was nominated by Dan Bachman, who talked about his time working with her on the Fallbrook yearbook where she served as editor-in-chief.

"This is a 250-page book done by students that needs to be reviewed by students, and it needs to go through someone who is going to be detailed oriented," Bachman said. "And when I give someone a project to do, it needs to get done. There's no, 'Well, I'll just take a zero.' When someone else doesn't do the job, the editor-in-chief has to then pick up the slack. If someone else is falling behind, she has her stuff done, I say 'Jackie, someone's not doing their job covering basketball. Can you go?'

"And every time she has come through. For a student to have that much responsibility and when they give their word and will get it done is something special."

Alvarez thanked everyone for the nomination and said she wants to major in psychology and is waiting to hear back from University of California schools.

Calloway was nominated by Troy Everhart.

"I have been so impressed by his true hard work and dedication to Fallbrook as a young man," Everhart, who coached Calloway on the school's football team this season, said. "When you see kids today where they so easily quit on things, Drew kept persisting. When he wasn't in during practice. You could always find him working with others, trying to get them caught up to speed on where he was at. He gives me hope of what all of our kids can be here on or off the field."

Calloway thanked his coach for nominating him and his family for their support over the years said he intends on attending San Diego State University and majoring in public administration.

Jesus was nominated by Marin Pinnell.

"In chemistry, we have this term 'entropy,' and entropy means that the universe is always trying to go to disorder," Pinnell said. "Well, that's a little stressful. So having a student like Regina who's steady is amazing. She has been in AVID for six years, and so she's very steady in her AVID career. It's allowed her to take AP classes and to have a GPA of about 4.0 and so that's a steady student. She was in cross-country, and if you've ever run before, you have to keep a steady pace. And so Regina is just this steady kid.

"She is one of those ones that you just cherish in your heart because she makes everyday flow smoothly," Pinnell said.

"Everything I do, everything I will ever do is for my parents," she said. "I'm eternally grateful for everything they've done. I came here when I was five. I was born in Guatemala. My first language was Spanish, and school wasn't easy at first because everything was new to me when we came here. But as I grew up, I learned that I'm going to have to find a way to give back for everything my parents have done."

She said she plans to major in business, engineering or nursing in college because she likes helping people.

Gomez was nominated by Cory Boice who couldn't attend the event.

"Every year I have a project student, and I don't mean that in a bad way, and I mean that in a great way," Gray said. "And this young lady today is kind of was my project this year, and this was why. I try and greet my students every morning as they walk through gates with either a fist pump or a good morning, and Araceli, as she walked by, didn't say a word. I said, 'Good morning;' no response. So, right then it was my project. Well, I have still yet to get a word from her.

"I think that this is probably how she would like to be honored, very quietly, not the center of attention, and she would just go about her daily activities at school, going to class, being kind to her fellow classmates when she would talk," he said. "She was a wonderful student. She graduated two weeks ago at the end of our second trimester and she has just been a joy on campus."

"I think she wants to go to Palomar College," he said. "She wants to study to become a makeup artist. And the way that she dedicates herself to school, I have no doubt that she's going to be one of the best makeup artists in San Diego County."