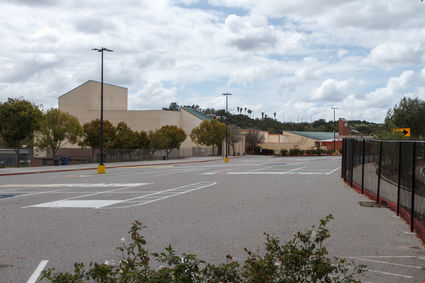 The Fallbrook High School student parking lot is empty on Tuesday, March 16 after orders to close schools amid the coronavirus outbreak.

Fallbrook area schools will be shuttered for several weeks amid ongoing concerns about spreading the novel coronavirus, it was announced Friday, March 13.

The San Diego County Office of Education announced that more than two dozen school districts around the county will close until April.

Locations for meal pick up starting Monday are:

Fallbrook Union Elementary also announced its regularly scheduled school board meeting, planned for March 16, will be conducted by teleconference.

Meanwhile, Palomar College, which serves many North County community college students, announced it will move most classes online as of March 30, following its March 23-27 spring break.

"These include classes at the San Marcos campus, as well as the education centers in Rancho Bernardo, Escondido and Fallbrook," the college said in an email announcement. "To prepare for this initiative, faculty are being provided two non-instructional days March 18 and March 19."

The announcements come a day after local school district officials said they did not have any immediate intentions to close schools.

The Bonsall, Vallecitos, and Fallbrook elementary and high school districts had said as late as Thursday afternoon that there were no plans to cancel classes.

"The decision to close schools, if necessary, will be made in consultation with our local public health department and the CDC," Trench, the FUESD representative, said Thursday, March 12. "At this time, it is not recommended by public health experts that K-12 schools close as a preventative measure. If these health organizations see the need to close one or more schools at any time, we are ready to do so."

By the end of the day Friday, all San Diego County and Riverside County schools had announced weekslong closures.