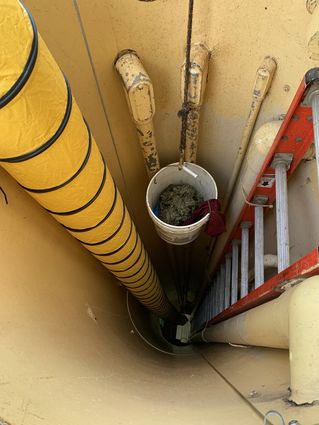 A bucket of 'flushable' wipes is being pulled up from a lift station after they got stuck in the sewer system.

The shortage of toilet paper is causing some residents to utilize other wiping substances and, when toilets are flushed with some of those alternatives, local sewer lines are impacted.

"The primary issue we have when people do that is backups in the sewer," Jack Bebee, general manager of Fallbrook Public Utility District, said.

"Paper towels are not particularly made either to get through the sewer system," Bebee said.

Scratch paper, wax and other materials have been flushed down toilet drains and into the sewer systems.

"We find all sorts of things in there," Kennedy said.

"Clogs have been caused by that," Bebee said.

Toilet paper is specifically made for being transmitted through the sewer system. Other products aren't.

"It increases the maintenance," Bebee said.

"They clump up," Kennedy said. "They also clog up pumps used to move the wastewater around."

Maintenance crews must address the backups.

Even if confined space entry is not required, the maintenance prevents the district personnel from adhering to the recommended 6-foot social distance separation.

"That's a multiperson crew that has to come out," Bebee said. "We're trying to keep people separated."

The backup may also be before the cleanout.

"A lot of times those things can cause problems on the homeowners' side," Bebee said.

Properties not connected to the sewer system could also see problems.

"What's bad for our system is bad for septic systems as well," Kennedy said.

FPUD has a wastewater treatment plant while Rainbow has a capacity agreement to send wastewater to the Oceanside outfall. Both systems begin with sewer lines. 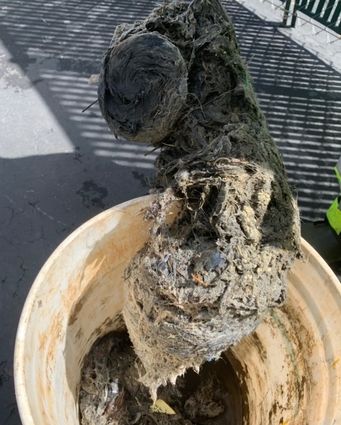 This is what a ball of wet wipes looks like when they all clump together at one of the lift stations.

The backups in the Rainbow system are less likely to be conveyed to the Oceanside section of the line.

"There are several lift stations in between there. We catch them there," Kennedy said.

Because the backups are caused by multiple items clogging together the problem might not be found immediately.

"Sometimes they don't show up right away," Bebee said.

"If people start to do it on a large scale, it will cause problems," Bebee said. "It's something that's important to keep that under control."

Joe Naiman has been writing for the Village News since 2001