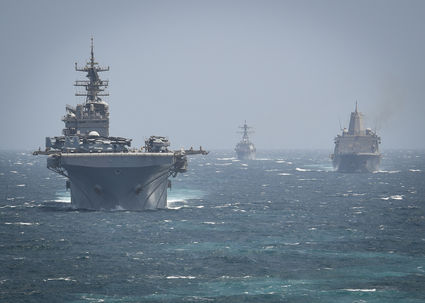 SAN DIEGO (CNS) - The captain of the San Diego-based destroyer Decator was removed from command in January after lying to San Diego fleet command about his ship's position, the San Diego Union-Tribune reported today.

According to a Navy investigation, Cmdr. John ``Bob'' Bowen, the Decator's commanding officer, ordered his crew on Sept. 13 not to report to fleet command that the guided-missile destroyer had gone dead in the water, the paper reported.

The ship had to stop to repair one of its propeller shafts, the U-T said. To hide the four-hour-long stop from the fleet, the crew reported inaccurate ship positions to make it appear the ship was continuing on its course, the investigation said.

By 2:30 p.m., the ship was underway again and it would keep reporting false coordinates to the Third Fleet until it caught up to where they had told the fleet they were later that evening, the investigation said.

Bowen reportedly told investigators that as long as the ship didn't fall more than four hours off schedule, he thought there was no need to notify the fleet, the U-T report said.

After the ship returned to San Diego, Navy officials received an anonymous hotline complaint and launched an investigation in November, the paper said. Bowen was fired as commanding officer in January.

The Navy said in a press release at the time that Bowen was relieved of duty due to a ``loss of confidence in his ability to command.''

Cmdr. John Fage, a Navy spokesman, told the newspaper on Friday that the Navy holds its leaders to a high standard.

``Their positions require the utmost in responsibility, reliability and leadership, and the Navy holds them accountable in cases where they fall short of those standards,'' Fage said.