Dentist celebrates 45 years in the village 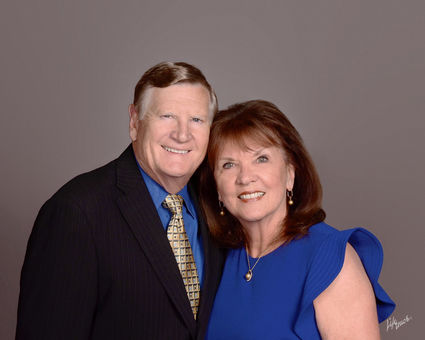 Dr. Philip Roberts and wife Gail Roberts have been serving Fallbrook at his dental office for 45 years.

Fallbrook's senior practicing dentist, Dr. Philip C. Roberts celebrated his 45th year serving the community April 1. Like so many nonessential businesses, his office was closed – but it was still a very special day.

"We had a nice celebration with friends, staff and former staff, plus our family," the dentist said. "We didn't see them face-to-face, but it was a nice alternative with nonstop phone calls, text messages all day long.

"My wife Gail made a special dinner and it was nice to hear from our three daughters, who are spread all across the country," he said.

Philip Roberts recently signed a new lease on his building in south Fallbrook, meaning that God-willing, he plans to reach 50 years or more here.

"I have no plans to retire," he said. "I really enjoy what I do here."

Dentists have a great longevity in Fallbrook. Dr. Ronald Allison retired in January 2019 after a 60-years here. He still lives in town.

"I was honored that my friend Dr. Allison asked me to take over his clients," Philip Roberts said. "I sure can't retire now with these new patients."

He also loves his patients.

"It's a very rewarding profession. Our motto is 'We treat people, not just teeth.' That's why we have so many people coming back," he said. "There may be two people with the same exact symptoms and condition, but that doesn't mean they get the same treatment. Everyone is different and special."

Roberts said he considered medicine as a career, but dentistry is so much more rewarding.

"That's because you can see the positive result of your work immediately. You see the satisfaction and get their feedback," he said.

Growing up in San Diego, the future dentist and his wife-to-be grew up in the same neighborhood, meeting when they were ages 10 and 7. The friends attended the same schools and church, and eventually both attended San Diego State. Philip Roberts decided to attend dental college at Creighton University in Omaha, Nebraska.

They married in 1971, two years before he graduated from dental school.

"It was a bad time to start my own business, since the country was in a recession," Philip Roberts said, and in 1973 he began working under Dr. Burton H. Press in the San Francisco Bay area.

"It was a great experience. I learned so much more than the mechanics you learn in school," Philip Roberts said. "He taught me practice management, and the importance of being a people person – of serving your patients well."

Press was a cutting-edge professional, Philip Roberts said, and president of the state dental association. He later became national president.

A San Diego dentist told Philip Roberts about a practice in Fallbrook where the dentist had died. Roberts was interviewed by the staff, and they liked him – and the rest is history.

"Fallbrook was – and still is – such a friendly place. It's a place where people look out for one another, a friendly village," Gail Roberts said. "This is the nicest place in Southern California."

Originally located in the north end of town at 304 E. Mission, Philip Roberts relocated the practice after nine years to a larger office in the southern section at 1680 S. Mission Road,

"When we moved here in 1975, there was one stop light," Philip Roberts recalled. "We would see our patents in town – in the grocery store, church or other places – and so many became our friends."

He also marveled at wide range of interesting clients who live or lived in Fallbrook, from movie actors and producers to World War II fighter pilots – as well as the "average Joe" clients he loves to serve.

"We're blessed in Fallbrook to have some really great dentists," Philip Roberts said. "We're all friendly to each other and get together at continuing education meetings."

Gail Roberts helps the practice as bookkeeper and other duties but was able to focus on raising three daughters.

"She's been my right arm, helping the most on the business side," Philip Roberts said. "The receptionist does the billing and insurance."

Having a full staff allowed Gail Roberts to focus on raising their three daughters, each who have become professionals. Their oldest daughter is an occupational therapist who works with children with disabilities in Canoga Park. Their middle daughter is a dentist in the Air Force, stationed in Alaska. And their youngest daughter is a speech pathologist in Tennessee.

Faith is important with the Philip Roberts, each serving in multiple leadership capacities at Zion Lutheran Church. Gail Roberts was also a teacher at the school.

When the Roberts celebrate their 50th wedding anniversary in July 2021, the hope is there will be no coronavirus or other situation to spoil the celebration.

To contact Dr. Philip C. Roberts, call (760) 728-5848. The practice has been closed since March 17 with the exception of caring for emergencies.