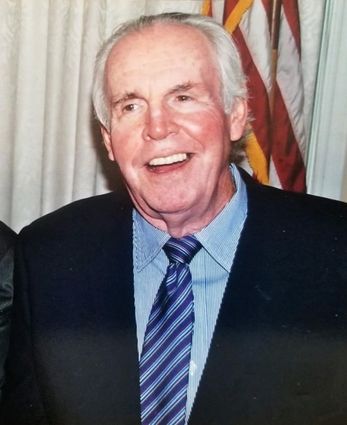 Thomas Francis Missett was born Dec. 3, 1940, in Oswego, New York, and died April 8, 2020. Tom, the second eldest son of Kathryn Rose "Kate" Missett and William J. "Bill" Missett, moved with his family to Suffolk, Virginia, in 1942 where his father Bill was editor of the local newspaper.

Tom grew up in Suffolk where, beginning at age 8, he not only delivered the paper with his late older brother Bill, but also worked in the mailroom, Linotype and ad department. He even appointed himself as assistant circulation manager before he was 10, igniting his life-long passion for newspapers.

Tom married his high school sweetheart, Sandra Hicks, in 1962 and shortly after moved to Casper, Wyoming, where he was classified advertising manager of the Casper Star Tribune. From there, Tom moved to Hammond, Indiana, to run the classified department at the Hammond Times before eventually moving to Oceanside to become publisher of the Blade-Tribune. Though Sandra and Tom divorced, they continued a friendship centered around their children and grandchildren.

Tom was 26 when he arrived in North County in 1967 and took over the "Blade" newspaper, making him the youngest publisher of a daily paper in the U.S. The Blade-Tribune was transformed from a sleepy beach town publication into a strong editorial force, especially when it came to local politics.

As North County grew in population, so did the reach and impact of the paper. Tom was awarded the contract to publish several military newspapers, including U.S. Marine Corps Base Camp Pendleton's base paper, The Scout, which received the Thomas Jefferson Award for Best Military Newspaper Worldwide for several years.

Tom was very community oriented and cared deeply for journalism that brought to light issues important to the public at large. Today there are many reporters and ad salespeople working around the country who learned their skills working for him.

Among his many contributions to the community beyond his work at the newspaper, Tom served as president of the Oceanside Chamber of Commerce in 1978, helped his brother Bill start the World Bodysurfing Contest held in Oceanside and was a big support of the Oceanside Boys and Girls Club.

And when he found out that some North County children couldn't afford to participate in local youth sports, he took action. In 1997, after retiring from a 30-year career at the newspaper, he started Signs of Support, raising money so that all children could have the opportunity to play sports.

During his retirement, he lived in Vista with his life partner, Dinah Minteer, for 25 years. In that time, Tom enjoyed vacations in Barbados, watching his grandchildren play sports, swapping stories and jokes with friends during his daily breakfast "meetings" at the Beach Break in Oceanside and going to the dog park with his beloved dog Gabby.

Tom was diagnosed with cancer several years ago. His first efforts at treatment proved successful, but recently the cancer returned. He fought valiantly, with support from Dinah and family and friends.

Even in the most trying times, Tom's charisma and larger-than-life persona shone through. As one of his physicians put it, "It was an honor to treat Tom. He was a true gentleman who held up through all he had to go through and battled all the way to the end."

Tom is survived by his partner Dinah Minteer, her children Courtney and Kellen; his former spouse Sandra Hicks Missett and their children, Joan (Hal Gambill), Mike (Tracy) and Kathy (Matt Goldman); his second wife Gayla Rothi and their son Austin; his brother Jim (Jane), sister Kate and brother Jack (Judi); his grandchildren, Samantha and Madison Missett, Garrett and Gracyn Gambill and Evan and Riley Goldman; many nieces and nephews and "the best damn dog in the world," Gabby. Tom is preceded in death by his brother Bill, father William and mother Kate.

In lieu of flowers, memorials may be made in his name to the Oceanside Boys and Girls Club. When possible, the family will hold a celebration of life event; details are forthcoming.