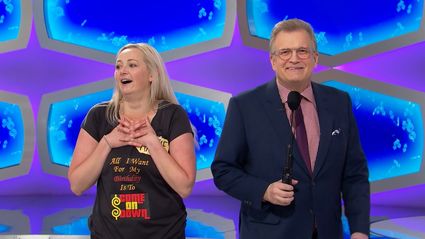 Fallbrook resident Kattie Corirossi is shown with host Drew Carey during her appearance on the Wednesday, May 5, episode of CBS's "The Price is Right." Village News/Courtesy of CBS photo

The third time was a charm for Fallbrook resident Kattie Corirossi, who was scheduled to be on the longtime CBS game show "The Price is Right" Wednesday, May 6.

Village News interviewed Corirossi before the airing of the episode, which was scheduled after the deadline for the newspaper. Needless to say, she couldn't say much about how she did on the show, but she was happy to talk about what a great time she had.

"I can honestly say, since I'm not married and I don't have any kids yet, that was literally one of the most exciting things I've ever done," Corirossi said.

That said, it's clear that Corirossi made it onto the show, what isn't clear is whether she won anything or not.

It was the third time that she and members of the family have tried to get onto the show, the second time they made it into the audience pool.

"The most recent, (was when) I went with all of my brothers and sisters about 14 years ago for one of Bob Barker's last episodes and we didn't get called up, but it was still just so exciting to be there with Bob," Corirossi said. "We also tried to go last year for my birthday, but we ended up actually getting there about 10 minutes late and missed going in. That was such a bummer for my birthday last year.

"This year, all of my brothers and sisters made a very big effort to get there on time. This was our third attempt, our second time in," she said.

Even then, they almost didn't make it.

"I literally got there at 12:59, and I had to stand in the security gate so that they wouldn't close it until my family came," Corirossi said. "I go, 'I'm sorry we missed this once. I'm not missing this again. I got people coming. Hold on.'"

Having the experience of attending the taping of the show once before and making it into the audience, she said she figured out a way to get producers' attention beforehand.

"The process to get into the building, into the whole show is a whole other story on its own," Corirossi said. "I feel like I kind of had a leg up on this one because you do your research, you figure out what they're looking for in the audience and what it takes to get called. I went with the mentality that I am not leaving until I get up on that stage. That was my goal. I wanted to get up there so bad, and I really had to put in the effort and put in the excitement and just show them that if you call me up, I will give you a good show."

Corirossi said the producers watch hopeful contestants for hours while they wait outside of the building.

"One of the producers is going to come out and he talks to every single person, all 300 people out there, and you get about 15 seconds to impress him and he is the one that makes all the decisions," she said. "When he came to us, I was like, 'OK, this is my time to shine.'"

Corirossi said all seven of the siblings made it inside for the taping and were seated right in the center of the room, but not everyone wanted to get called up.

"They were terrified of getting called, they said, 'We're here to support you and root for you,'" she said. "If they call one of us, you just get up and go anyway. But they were like, 'No, we don't want to be on camera.'"

Once she got into the room and seated, she said everything happens really fast.

"Everything is just so fast-paced and loud and hectic that you're thinking nobody can actually think their way through this game," Corirossi said. "This game is nothing but luck. You're watching people up onstage, and everything happens in under a minute. And then you know, all of a sudden somebody guesses some random prize, and they win a trip somewhere or something like that and you're like, 'Wow, they just did that in 30 seconds.' There's no way that you can cheat at a game like this. I really know that this game is all luck to be honest with you."

While avoiding talking about how she did, she insisted that the episode is a good one.

"It's just such an exciting episode, and there's just so many funny things that happen and I'm just really excited that I think people are going to get a good laugh out of it," Corirossi said.