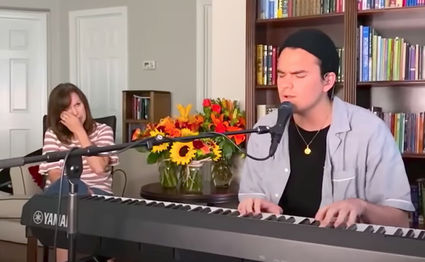 Jonny West performs his rendition of "Amazing Grace" as his mother wipes a tear from her eye during the Sunday, May 10, episode of "American Idol." West's performance means he has made it into the top 7 of the show with a chance to compete in the series finale Sunday, May 17. Valley News/Courtesy photo

While one local singer didn't quite make it, another finds themselves as one of the frontrunners to win "American Idol" Season 18 on ABC, according to judge Katy Perry.

Sitting flanked by his mother and his grandmother, Perry told Murrieta's Jonny West that she thinks he could win the whole thing.

"I'm 100% sold," Perry told West after his performance of "Amazing Grace" performed with his own twist on the traditional classic. "I personally think you should win this competition, and even if you don't, I bet you will have the biggest career."

After he finished the song, West received hugs f...