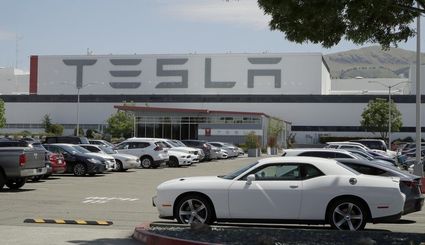 Vehicles are seen parked at the Tesla car plant Monday, May 11, 2020, in Fremont. The parking lot was nearly full at Tesla's California electric car factory Monday, an indication that the company could be resuming production in defiance of an order from county health authorities. AP photo/Ben Margot photo

Tesla CEO Elon Musk has emerged as a champion of defying stay-home orders intended to stop the coronavirus from spreading, picking up support – as well as critics – on social media.

Among the supporters was President Donald Trump, who Tuesday morning, May 12, tweeted that Tesla's San Francisco Bay Area factory should be allowed to open despite local health department orders that it stay closed except for minimum basic operations.

"It can be done fast and safely," the president tweeted, joining many of Musk's 34 million Twitter followers who back the def...