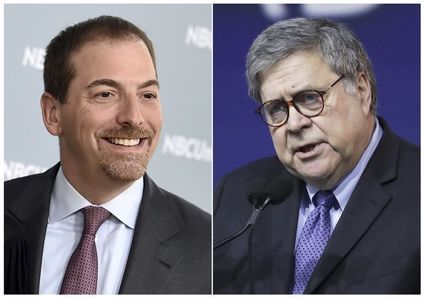 This combination photo shows Chuck Todd at the 2018 NBCUniversal Upfront in New York May 14, 2018, left, and Attorney General William Barr speaking at the National Religious Broadcasters Convention in Nashville, Tennessee, Feb. 26, 2020. NBC News is apologizing for a "Meet the Press" segment that cut a portion of an interview with Attorney General William Barr that left a false impression. It has led to President Donald Trump calling for the network to fire the show moderator Chuck Todd. The show was discussing the Justice Department's decision to drop its case against the president's former national security adviser, Michael Flynn, and referred to a CBS interview where Barr said of the decision that history is written by the winners. Todd criticized Barr for not making the case that he was upholding the law – but, in fact, Barr went on to do that in his complete answer to the CBS reporter. Valley News/AP photo

NBC has apologized for "inaccurately" cutting a portion of an interview with Attorney General William Barr that left a false impression with viewers of "Meet the Press."

The apology didn't satisfy President Donald Trump, who tweeted both Sunday, May 10, and Monday, May 11, that "Meet the Press" moderator Chuck Todd should be fired.

The news show was discussing the Justice Department's decision recently to drop its case against Michael Flynn, the president's former national security adviser, when Todd played a portion of an interview that Barr gave Thursday...