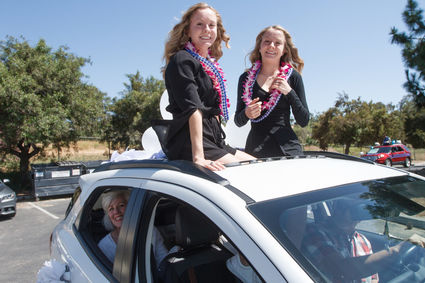 Bonsall High School class of 2020 graduates Abigayle Ford and her twin sister Isabella ride on the top of their family's car as they tour around the high school during a graduation celebration, May 22.

For many of the seniors graduating from Bonsall High School this year, it wasn't exactly how they pictured they would be celebrating the end of their high school career – but it wasn't that bad either.

"This wasn't exactly what I had envisioned for our graduation ceremony, but I'm so grateful that we got to celebrate in some shape and form," Heather Holdo, one of BHS's valedictorians, said from the front seat of her parents' car Friday. "I'm very glad to have graduated with the class that I did.

"It's been very different from what I had expected. I was a little sad when there was the whole canceling of all the classes because I knew I wouldn't necessarily be able to hang out with my friends again in the same way or finish off my senior year the way I had planned. But I'm looking forward to the future and to getting my degree at UCLA," she said.

Holdo, along with her fellow classmates were invited to a drive-thru graduation ceremony, put on by the staff and district that featured a drive-up cap and gown delivery, drive-thru diploma handoff, a car show by a local car club, music from a live DJ and lots and lots of cheering from school staff, San Diego sheriff's deputies, North County Fire and U.S. Marine Corps representatives.

Graduates arrived in vehicles and didn't exit the vehicles, most of which had some elaborate decorations on them. Some grads stuck their head out the windows, others danced and waved through sunroofs and others left the sliding doors of vans open so they could soak up the congratulations coming their way.

"I think it's really sweet of them, and I've known them for the last four years, if not more," Holdo said of the event put on by the school and district. "And I'm so glad that they were able to put this all together, and I was able to see them one last time. Perfect."

The school will also hold a virtual graduation ceremony in the coming weeks as well.

School principal Jason Fowler was on hand all afternoon in his black gown with a mask on handing the graduates their diplomas as they came through.

"It's good; it's a good experience for the kids," he said. "I wish we could do more and these guys have had to sacrifice a whole lot for this year with the COVID-19 situation and everything. But we want to do everything we can for them. This is just one small thing. We're also doing a virtual graduation to celebrate the right way."

Crystal Dence, the school's College and Career technician and registrar, lead the charge for the staff and district as she and Cindy Prestwood, dean of students; counselor Eryn Kjelland and Fowler planned the drive-thru event.

"We just kind of started thinking of what we can do and trying to figure out ways to make it a little more exciting for the kids," Dence said.

She said nearly everyone she called and asked to participate in the event immediately said "yes." And because there won't be a formal graduation ceremony this year, they were able to use some of the funds they saved to make this event more special.

The graduates received donated buttons and ribbon necklaces; the school imported leis from Hawaii. The DJ, who performed at several school events in the past, insisted on coming out to honor the graduates. All the seniors will receive free yearbooks as well.

"It was just really cool to see everybody try to do something for these kids," Dence said.

David Jones, superintendent of Bonsall Unified School District, celebrated with the students at the drive-by as well, cheering them on as they drove through with their families.

"However, in light of the situation that we can't control as a superintendent, I have no other choice but to follow the directives given by the county and the Centers for Disease Control and Prevention," he said. "And I just very, very much appreciate the staff, their planning and dedication to doing something special. In the first hour that I've been here, the only response has been the parents have been appreciative that we're doing something to recognize the kids and make it special for them." 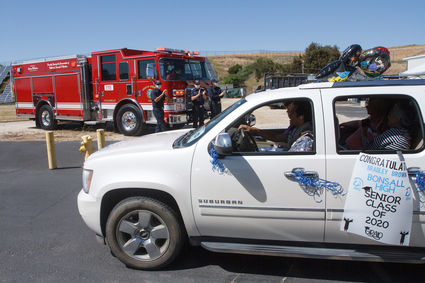 2020 Bonsall High School graduates and their families tour around the high school stopping at a variety of spots to receive items such as their diplomas, Hawaiian leis and their cap and gowns.

Senior Austin Altizer looking out the side of his family's van, smiling, waving and thanking everyone for being there.

"I'm pretty happy," he said. "I'm actually glad to be graduating and going to college.

"My parents love it. My siblings love it. It's a fun thing. It's really unique actually for something like this to happen, but still, I'll have a lot of fun with it. It was actually all-out pretty fun just to come down here and get my diploma and to be good to go," Altizer said.

Senior Jonathan Esposito said he was excited while driving through, waving to each person there and grateful for the experience.

"This is the end of one adventure and the beginning of a new one," he said. "Honestly, I'm enjoying this one. To be fair, I can't complain about something I never experienced, so I am just enjoying this, and seeing everybody excited for us graduating is something special."