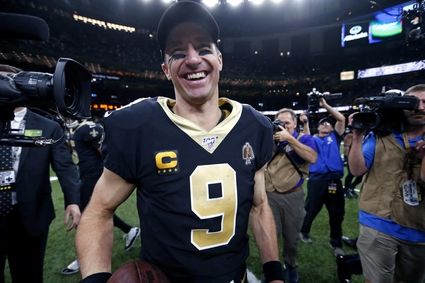 In this Dec. 16, 2019, file photo, New Orleans Saints quarterback Drew Brees (9) smiles after defeating the Indianapolis Colts 34-7 in an NFL football game in New Orleans. A person familiar with the situation says the Saints and record-setting quarterback Drew Brees have agreed on a two-year, $50 million contract. The person spoke to The Associated Press on condition of anonymity on Tuesday, March 17, 2020, because the deal has not been announced. (AP Photo/Butch Dill, Fle)

NEW ORLEANS (AP) - Drew Brees was sharply criticized by fellow high-profile athletes, including some of his own teammates, on Wednesday after the Saints quarterback reiterated his opposition to kneeling during the national anthem.

In an interview with Yahoo, Brees was asked to revisit former NFL quarterback Colin Kaepernick's 2016 protest of police brutality against minorities, in which Kaepernick knelt during the national anthem before games.

"I will never agree with anybody disrespecting the flag of the United States," Brees began, adding that the national anthem reminds him of his grandf...