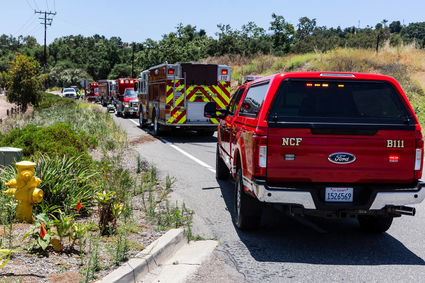 Fire vehicles line up at the scene of a crash at Laketree Drive and Gird Road in Fallbrook Thursday afternoon, one of two collisions requiring assistance from emergency crews in an hour span.

Two separate crashes closed roads in Fallbrook this afternoon and at least two people were injured in one of them.

The North County Fire Protection District announced on Twitter a little after 12:30 p.m. that crews were working to rescue the occupants of a vehicle that crashed near Laketree Drive and Gird Road. Two people were hurt, and nearby roadways were impacted for about 30 minutes.

About an hour later, the fire district tweeted that firefighters were at the scene of a crash near South Main Avenue and West Aviation Road.

Officials did not say whether anyone involved in the second crash...