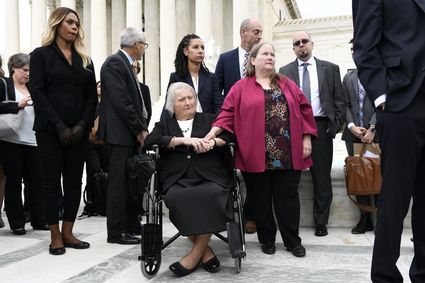 In this Oct. 8, 2019, file photo, Aimee Stephens, seated center, and her wife Donna Stephens, in pink, listen during a news conference outside the Supreme Court in Washington. AP photo/Susan Walsh, file photo

The Supreme Court ruled Monday, June 15, that a landmark civil rights law protects gay, lesbian and transgender people from discrimination in employment, a resounding victory for LGBT rights from a conservative court.

The court decided by a 6-3 vote that a key provision of the Civil Rights Act of 1964 known as Title VII that bars job discrimination because of sex, among other reasons, encompasses bias against people because of their sexual orientation or gender identity.

"An employer who fires an individual for being homosexual or transgender fires that...