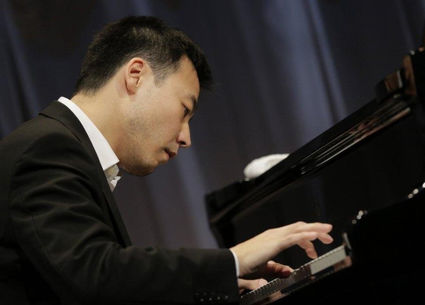 A cybersecurity professional, Cheng has been competing on the amateur circuit since 2011. He has placed in contests in Chicago; Colorado Springs, Colorado; Boston; Washington; Paris and Warsaw, Poland. In 2016, Cheng advanced to the semifinals in the highly acclaimed Van Cliburn competition, which brings together some of the most talented amateur pianists from around the world.

"Music is something that I've learned a lot of discipline from," Cheng said. "The goal of always pushing yourself to improve, no matter what, is something you can apply to playing the piano and to a successful career."

Cheng was born in China and immigrated to the U.S. with his parents when he was 5. He grew up in Dallas, where he started piano lessons on an electronic keyboard at the age of 8.

"My mom made me take piano lessons, and I didn't like it," he said. "I wanted to stay home and play Nintendo. But I always learned everything my teacher taught me and I played well, so I stuck with it."

Things changed when he got to college and discovered that the University of Texas at Dallas had a Steinway he could play whenever he wanted. Before, between and after his computer science classes, he played the Steinway under the mentorship of professor and composer Robert Xavier Rodriguez.

"He taught me to focus not on just playing notes, but on shaping and forming sound and creating character, which was really special to me," Cheng said.

For the Fallbrook Music Society concert, Cheng performs an all-Beethoven program in honor of the anniversary of the composer's 250th birthday.

The YouTube channel is free and can be accessed by searching for "Fallbrook Music Society" in the search bar or by visiting http://bit.ly/FallbrookMusicSociety. Patrons are encouraged to subscribe to receive notifications of future concerts.

Submitted by the Fallbrook Music Society.