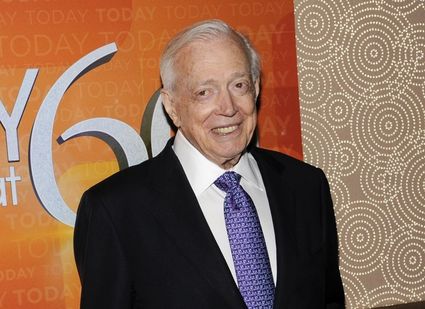 This Jan. 12, 2012 file photo shows Hugh Downs at the "Today" show 60th anniversary celebration in New York. Downs, a genial and near-constant presence on television from the 1950s through the 1990s, has died. His family said Downs died of natural causes Wednesday, July 1, 2020, in Scottsdale, Ariz. He was 99. Downs was a host of the 'Today' show on NBC, worked on the 'Tonight' show when Jack Paar was in charge, and hosted the long-running game show "Concentration." (AP Photo/Evan Agostini, File)

NEW YORK (AP) - Hugh Downs, the genial, versatile broadcaster who became one of television's most familiar and welcome faces with more than 15,000 hours on news, game and talk shows, has died at age 99.

Downs died of natural causes at his home in Scottsdale, Arizona, on Wednesday, said his great-niece, Molly Shaheen.

"The Guinness Book of World Records" recognized Downs as having logged more hours in front of the camera than any television personality until Regis Philbin passed him in 2004.

He worked on NBC's "Today" and "Tonight" shows, the game show "Concentra...