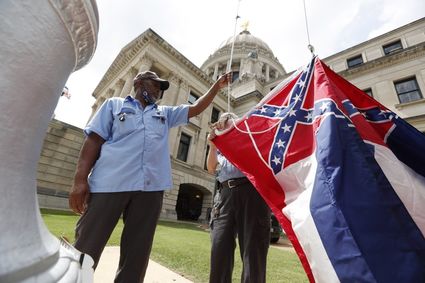 Mississippi Department of Finance and Administration employees Willie Townsend, left, and Joe Brown, attach a Mississippi state flag to the harness before raising it over the Capitol grounds in Jackson, Miss., Tuesday, June 30, 2020. The two men raised about 100 flags, provided by the Secretary of State's office, for people or organizations that purchased a state flag that flew over the grounds. Gov. Tate Reeves will sign a bill Tuesday evening retiring the last state flag with the Confederate battle emblem during a ceremony at the Governor's Mansion. Upon the governor signing the bill, the flag will lose its official status. (AP Photo/Rogelio V. Solis)

JACKSON, Miss. (AP) - With a stroke of the governor's pen, Mississippi is retiring the last state flag in the U.S. with the Confederate battle emblem - a symbol that's widely condemned as racist.

Republican Gov. Tate Reeves signed the historic bill on Tuesday afternoon that takes the 126-year-old state flag out of law, immediately removing official status for the banner that has been a source of division for generations.

"This is not a political moment to me but a solemn occasion to lead our Mississippi family to come together, to be reconciled, and to...