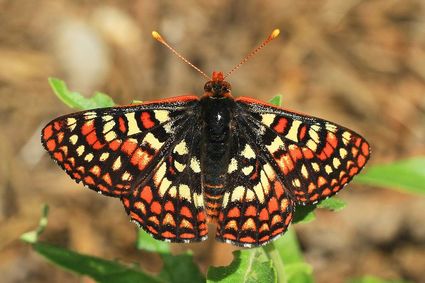 The petition, filed with the California Fish and Game Commission, notes that the Quino checkerspot was once one of the most common butterflies in Southern California. But with the rapid spread of urban sprawl, the butterfly has lost more than 75% of its historic habitat and in 1997 was listed as endangered under the federal Endangered Species Act.

``It's alarming that a butterfly that once filled the skies of Southern California is now only found in pockets of its former range,'' said Dr. Tara Cornelisse, an insect scientist at the Center for Biological Diversity. ``Even more alarming is that some of those few critical patches of remaining habitat are slated to be developed. With insects declining at a

not allow it to be carved up piece by piece.''

The Center for Biological Diversity is an Arizona-based nonprofit organization known for its work protecting endangered species through legal action and scientific petitions. The Endangered Habitats League is a similar organization focused specifically on Southern California.

Despite federal protection, the Quino checkerspot butterfly remains at risk due to continued habitat destruction and fragmentation, climate change, nitrogen pollution, invasive species and lack of enforced protections, a statement from the center said.

In the past decade, the butterfly has only been observed in 33 of 62 historic sites and only inhabits patches southwest Riverside and southern San Diego counties, according to the center.

It is a subspecies of the Edith's checkerspot butterfly and is distinguished by its checkerboard pattern of white and orange spots on its black wings.

Under the California Endangered Species Act, the California Department of Fish and Wildlife has three months to make an initial recommendation to the Fish and Game Commission, which will then vote on the petition at a public hearing. If the Quino checkerspot butterfly wins protection under the act, the state can enact its own protections.