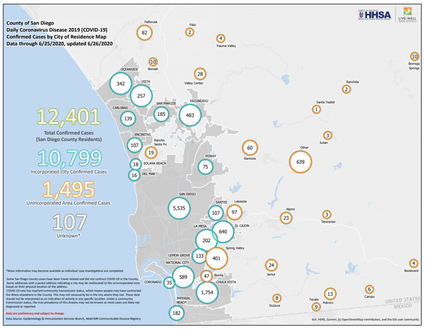 It's the fifth time in six days that health authorities reported more than 300 new COVID-19 cases and the first day yet with new cases topping 400. The total number of cases recorded since the pandemic began is now 12,401, and with six additional deaths reported Friday, the number of deaths increased to 358.

Of those deaths, four men and two women died between June 13 and June 24, and ranged in age from late 50s to mid-90s. All had underlying medical conditions.

More than 300 cases were reported on Sunday, Monday, Wednesday and Thursday this week.

Another community outbreak was reported Friday in a business, bringing the number reported in the last week to six -- falling below the threshold the county set in a set of 13 ``triggers'' announced earlier this month for the first time since June 18.

Community-transmitted COVID-19 outbreaks activated one of those triggers on that date, placing a pause on any additional openings allowed by the state.

The county could take industry-specific actions, pause all reopening efforts or even dial back reopenings if enough of the metrics rise above a certain threshold. The threshold for community outbreaks -- defined as three or more lab-confirmed cases from different households -- was fewer than seven in a week's span.

A ``modest uptick'' in the number of hospitalizations and ICU visits also has officials worried.

``The sense of community we brought together at the beginning of this to slow the spread is the same one we need to summon now,'' County Supervisor Nathan Fletcher said Wednesday. ``It's natural to see the spread when things start to reopen. What we want to avoid is an exponential spread.''

Fletcher said individual choices to do everything possible to prevent the spread would be vital in coming weeks. Frequent hand washing, wearing facial coverings in public and maintaining social distancing would all continue to make the difference in how quickly the illness makes its way through the community.

Among those who have contracted the disease in the San Diego region, 1,706 -- or 13.8% -- have required hospitalization. A total of 466 patients -- representing 3.8% of all cases, and 27.3% of hospitalized cases -- have been admitted to an intensive care unit.

``These could influence cases going forward for days, weeks or months,'' she said Wednesday.

Wooten, suggesting how long the COVID-19 pandemic could impact the region, said it may not be safe for people to have gatherings at their homes ``until sometime next year.''