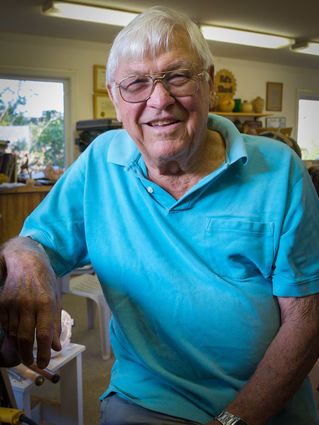 Local veterinarian-turned-woodturner Edward L. Anderson, D.V.M., entered this world during the Great Depression and left it during the Great Pandemic. During the intervening 94 years, he led a storied life, one of heroism and heartache, of love and laughter, of tenacity and triumph.

Born June 28, 1925, in LaGrange, Illinois, Ed was the youngest of three. The only boy, he lived to torment his older sisters and to engage in good-natured mischief when and where he could find it. Whether it was shimmying down from his second-floor bedroom window to escape for a few minutes of fun during a yearlong illness that kept him house-bound to playfully pushing his sister Erma over his Irish Mail toy car, inadvertently causing her to suffer a gash on her leg deep enough to require stitches, to shooting out the street lamp on his street with his BB gun – triggering an extraordinarily exciting kaleidoscopic explosion and causing the BB to ricochet into the corner of his nose – he kept his ever-patient parents, Florence and Arvid, on their toes and on watch.

(In fact, Ed was so prone to injuries during his shenanigans that Florence would eventually come to react to his latest mishaps with an exasperated, "Oh, Edward!" while rolling her eyes.)

Until the day he died, Ed remained the 6-year-old boy with a frog in his pocket, taking great pleasure in playing practical jokes on friends and family – and, yes, in telling a ribald joke here and there, followed by a shoulder-hunching giggle and wide grin.

Yet mischievousness wasn't the only characteristic that defined Ed, so did a sense of duty and a drive to do the right thing, whether for his family, his country or the world. So, at the age of 17, he enlisted in the Army and set off to fight as an Infantryman under Gen. Patton in World War II, fighting in the Battle of the Bulge and many other skirmishes large and small. Though Ed remained humble for his entire life, his time serving as a soldier was marked by great heroism, along with the anguish of war and the loss of friends.

After returning from the War in 1945, Ed attended Iowa State University under the G.I. Bill, ultimately attending veterinary school and marrying his childhood sweetheart, Wanda Ronneberg.

After graduating, Ed began work at the Brookfield Zoo in Chicago, caring for the giraffes and apes there. Following his time at Brookfield, he practiced veterinary medicine in Joliet, Illinois.

Eventually, wanting their young daughters to see the oceans, deserts and mountains of California, Ed and Wanda packed up their station wagon, with their daughters Susan, Barbara and Julie and several pets in tow, and moved to the Los Angeles suburb of Bellflower, where Ed began working for Dr. Charles Ozanian.

Before long, Ed and Wanda had another daughter, Carole – their fourth – and Ed became a partner at Bay Cities Pet Hospital, a large veterinary practice in Torrance, California.

(Though he never admitted to pining for a boy, Ed was fond of dressing his young girls in their pajamas, freshly scrubbed, then situating them on the couch, side by side like ducks in a row, and watching "Combat" with them on the family's black-and-white TV. He also was fond of saying, eyes wide in mock wonder that as the father of all girls, he'd heard more doors slammed in his life than any other person on the planet.)

After eight joyful years in California, the family suffered an unspeakable tragedy. During a family vacation at Lake Mojave in Arizona, Wanda died suddenly while water skiing. Years later, shaking his head, Ed would say that he didn't know how he survived not only Wanda's death, but the aftermath of trying to run a busy vet clinic while raising four girls on his own.

Soon, though, love would find Ed again. He met Nancy Williams, a client at his pet clinic, while caring for her dog. After a brief courtship, Ed and Nancy married – with Nancy bringing yet another daughter, Karen, into the Anderson fold. (That's right: five girls!)

Having grown weary of the city lifestyle and a hectic veterinary clinic, Ed sold his partnership in Bay Cities in 1973 and moved his family to bucolic Fallbrook, where he had owned a house since the mid-60s. Ed hung out a shingle as a small-town veterinarian at Circle R Animal Clinic in Escondido, where clients would bring their pets from all-around the county to receive his warm, generous care. (And where more than a few animals were deposited on his front stoop under dark of night, only to be adopted by Ed.)

Interested more in providing care to animals in need than in turning much of a profit, Ed practiced out of his small country clinic until the age of 75, when he reluctantly retired from veterinary medicine.

Early in his retirement, Ed developed an interest in woodturning. After taking several classes at Palomar College, his interest turned into a passion (some would say an obsession, pointing to his penchant for spying a large log on the side of the road while driving through town, which would inspire him to pull over and haul the log into the back of his truck "just to see what it would turn into"). News of his creations began to spread, and pieces of his art are now displayed in homes and businesses all across the San Diego area.

Always a gentleman, with a healthy dose of good-natured scoundrel mixed in, Ed was a scientist and an artist, a storyteller and a listener, a lover of jazz and jellybeans, and a father figure to many. But perhaps more than anything, he was a keen observer of life. With his quick eye and lightning wit, Ed could find meaning in the profound and humor in the inane. He seemed most fond of offering commentary on the little absurdities of everyday life.

That doesn't mean that poignancy was lost on Ed, though. Writing in one of two memoirs about the War, he offered this: "Somewhere during this mess, I was working my way back through what was called the 'Repple Depple' (replacement depot) to return to my unit. This procedure usually took a period of days, after which I (along with others who either had been wounded or sick and were more or less orphans) would be returned to certain danger, to once again endure fear and discomfort. As I recall, a group of us, strangers to each other, were bedding down for the night when a sergeant, probably part of the replacement system, half in jest but also solemnly, came by each of our bunks, gave us each a shot of schnapps and tucked us in for the night. And you know, the memory still brings tears to my eyes."

Ed leaves behind his wife of nearly 50 years, Nancy; his daughters Susan Greenwood, Barbara Varela, Julie Anderson, Karen Webb and Carole Lucia; and sons-in-law Jim Parkhurst, Bob Anderson, Eric Webb and Jeff Lucia, all of whom considered him a father and relished his stories and sage counsel. Ed always enjoyed the company of his 12 grandchildren and nine great-grandchildren – many of whom, at last, were boys.

A member of the Greatest Generation, Ed had hoped to visit the National WWII Museum in New Orleans with the Gary Sinise Foundation. Unfortunately, he was never afforded that opportunity, although Nancy did visit the museum in his honor during a recent trip to the city. Copies of his war memoirs now reside there.

Ed will be missed by so many and leaves a huge void where he once walked.

As a recipient of the Bronze Star and the Distinguished Service Cross, Ed will be interred at Arlington National Cemetery at a future date.