Discourse over national anthem looms for NBA, other leagues 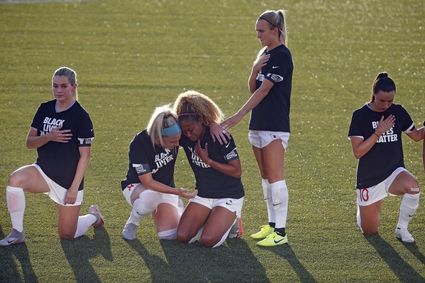 In this June 27, 2020, file phohto, Chicago Red Stars' Julie Ertz, second from left, holds Casey Short, center, while other players for the team kneel during the national anthem before an NWSL Challenge Cup soccer match against the Washington Spirit at Zions Bank Stadium in Herriman, Utah. The National Women's Soccer League revised its anthem policy after most players knelt during the anthem before season-opening games last weekend at the Challenge Cup. (AP Photo/Rick Bowmer, File)

Rick Carlisle isn't sure what to expect from players during the national anthem when the NBA season resumes in empty arenas in Florida.

The Dallas Mavericks coach does know how he will react if players kneel or otherwise violate a longtime league policy that requires them to stand during the playing of "The Star-Spangled Banner."

"We support our players 100% in terms of their ability to express themselves individually or as a group if they wish," Carlisle said. "I don't know exactly what it's going to look like in Orlando. There could be different forms of ex...