US general skeptical that bounties led to troops' deaths 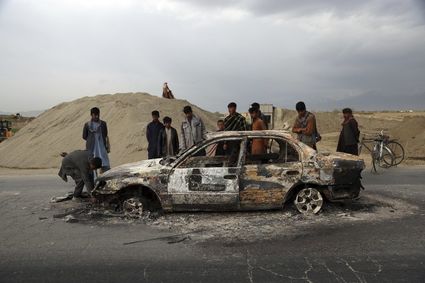 In this April 9, 2019, file photo, Afghans watch a civilian vehicle burnt after being shot by U.S. forces following an attack near the Bagram Air Base, north of Kabul, Afghanistan. Three American service members and a U.S. contractor were killed when their convoy hit a roadside bomb on Monday near the main U.S. base in Afghanistan, the U.S. forces said. The Taliban claimed responsibility for the attack. Intelligence alleging that Afghan militants might have accepted Russian bounties for killing American troops didn't scuttle the U.S.-Taliban agreement or President Donald Trump's plan to withdraw thousands more troops from the war. (AP Photo/Rahmat Gul, File)

WASHINGTON (AP) - The top U.S. general for the Middle East said Tuesday that the intelligence suggesting that Russia may have paid Taliban militants to kill American troops in Afghanistan was worrisome, but he is not convinced that any bounties resulted in U.S. military deaths.

Gen. Frank McKenzie, the head of U.S. Central Command said in a telephone interview with a small group of reporters that the U.S. did not increase force protection measures in Afghanistan as a result of the information, although he asked his intelligence staff to dig into the matter...