It's a good problem to have at the Santa Margarita River Preserve if they are being honest. But it is no doubt a problem.

The Santa Margarita River Trail Preserve, which is owned and managed by The Wildlands Conservancy, and the Santa Margarita Preserve, owned and operated by the county of San Diego Parks and Recreation Department, has been experiencing large crowds flocking to the area since the preserve reopened May 9.

That's the good part – they want people to enjoy the natural resources that the river valley provides.

However, on any given day, visitors will find cars parked illegally on streets along De Luz Road and Sandia Creek Drive, with hikers trying to head into the preserve by sticking to the side of the road as to not get struck by passing cars.

Even more troubling for the stewards of the nature preserves, some of the visitors are entering the preserve closer to where they are parking, creating their own pathways and trampling on sensitive ecological resources to avoid having to backtrack to the main trailhead.

"There has been a recent surge of visitation over the last three months that has led to issues related to overcrowding which subsequently has led to natural resource impacts that have raised alarm for me and my counterparts with the county Department of Parks and Recreation," Zach Kantor-Anaya, regional director of The Wildlands Conservancy, said. "Local residents have become upset by the overwhelming volume of traffic on the county roadways that slice through the river valley, especially during busy weekends. The increase in traffic brings unsafe road conditions for drivers and pedestrians, damage to a variety of natural resources and incredible amounts of trash that is left behind by those who visit."

He said that COVID-19 has "compounded this problem due to limitations in local sheriff's department and California Highway Patrol presence, increased demand for free outdoor recreation and challenges in staffing and managing the visiting public."

According to Kantor-Anaya, loads of visitors come to the river to cool off with friends and family, "finding peace and renewal in the flowing waters." Others visit with a beachgoer mentality that creates an issue between the conservancy's mission of protecting the natural resources of the area while providing access and education to the people who visit.

For instance, if someone enters the preserve with a cooler and an umbrella, staff members will intervene to discourage people from treating the preserve like it's a beach. But sometimes, when visitors avoid the designated preserve entry points, by essentially sneaking in, staffers miss that interaction.

"It's not a question of if, it's a question of when somebody is going to get hurt out there," Kantor-Amaya said. "People are coming down to the river and having this beach lounge experience with some alcoholic beverages and it just makes for a risky situation."

The staff presence at the preserve is meant to educate visitors about the resources within the preserve and reinforce the importance of maintaining and protecting that environment.

They have made the effort to make contact with everyone who visits the preserve, even borrowing staff from other preserves and hiring two seasonal workers.

Kantor-Amaya said they have been working with California Highway Patrol which is responsible for policing the county roads in the area. But according to CHP Officer Kevin Smale, staffing issues make patrolling the area difficult.

"We're extremely short staffed," he said. "A lot of times we're not able to get out there and enforce ('no parking' violations). It's just one of those things where if we can't enforce it, there's not a whole lot that anybody can do."

Officer Smale said that due to the small, rural type of roads that surrounds the preserve, the county installed "no parking" signs along the roads.

"The signs aren't confusing, it's pretty well-marked," he said. "When people disobey the signs and the roads are narrow, it becomes a hazard."

The organization has enjoyed a good relationship with the San Diego County Sheriff's Department, and they have increased patrols in the area on weekends; however, they have no jurisdiction along Sandia Creek Drive and De Luz Road. 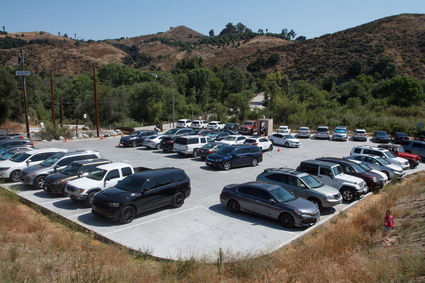 Weekend visitors to the Santa Margarita River Trail Preserve along Sandia Creek Drive arrive to a full parking lot as The Wildlands Conservancy has observed a 50% increase of visitation in recent weeks.

Despite existing partnerships between the San Diego County Department of Parks and Recreation, Fallbrook Trails Council, California Department of Fish and Wildlife, Fallbrook Land Conservancy, Fallbrook Beautification Alliance and local residents, they believe more action is needed to control what's happening out there.

They said that the groups are realizing that it's time to act on the need to provide more parking in the area so that more people can enjoy the preserve safely and legally.

"We must do more to make sure those visiting this special place are being welcomed with a safe and enlightening experience," Kantor-Amaya said.