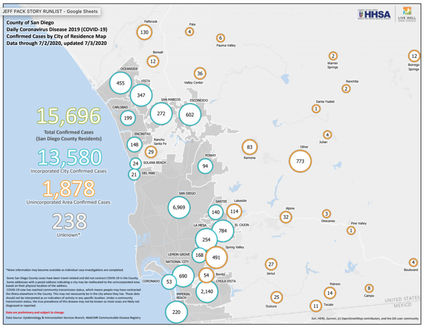 SAN DIEGO (CNS) - San Diego County was placed on the state's COVID-19 monitoring list Friday afternoon, which could lead to closures or new restrictions on businesses following the Fourth of July weekend.

San Diego County was the final county in southern California to be place on the state's monitoring list after it saw a steady rise in daily coronavirus cases.

The number of local cases has now reached 15,696, and the 489 cases reported Friday is the sixth time in a week the number of daily cases have been more than 400. Of the 7,307 tests reported Friday, 7% returned positive. The 14-day rolling average of positive tests is 5.3%.

An additional 10 people -- six women and four men -- have died from COVID-19, raising the county's total to 387. All of the them had underlying conditions and ranged in ages from mid-50s to late 90s.

No new community outbreaks were reported Friday, lowering the one-week count to 21. The county is still well over the limit of seven, which San Diego County set for itself.

Now on the state's monitoring list, several businesses could be forced to change the way they do business indoors by as early as Tuesday, and restrictions would remain in place for a minimum of three weeks. Businesses affected include restaurants, wineries and tasting rooms, movie theaters, cardrooms, family entertainment centers, museums and zoos.

The potential restrictions follow the county's recent self-imposed closure of bars and a newly instituted 10 p.m. curfew for local eateries.

Beaches remain open in San Diego County this weekend amid beach closures across southern California. Beach parking lots will be closed Friday, Saturday and Sunday, as part of Gov. Gavin Newsom's announcement that the lots would be closed statewide during the holiday weekend.

Friday, lifeguard officials from Encinitas and Del Mar reported beach population estimates that were on par with or greater than populations from years past.

He said that not all beachgoers are maintaining social distance. He called the beach population a ``mixed bag'' of those remaining socially distant and those who are not.