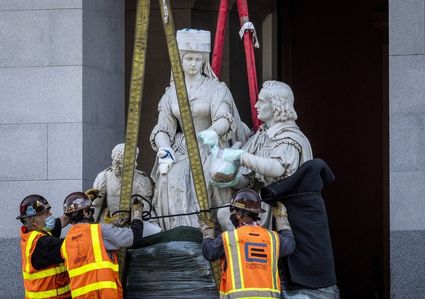 A construction crew moves a 5-ton statue of Christopher Columbus and Queen Isabella to a flatbed truck at the west steps of the Capitol in downtown Sacramento, Calif., Tuesday, July 7, 2020. The statue was removed from the Capitol's rotunda, which was its home since 1883, two weeks after Legislature leaders announced it would come down. (Daniel Kim/The Sacramento Bee via AP)

SACRAMENTO (AP) - Crews carried out a statue of Christopher Columbus from the center of the California Capitol rotunda on Tuesday, three weeks after legislative leaders announced it would be removed.

It's the latest statue of Columbus and other colonial figures to be toppled or taken down in the U.S. and beyond, following the uproar over racism after the police killing of George Floyd in Minneapolis. Baltimore protesters threw a statue of the Italian navigator into the city's harbor last Saturday.

The depiction of Columbus appealing to Queen Isabella I, who finan...