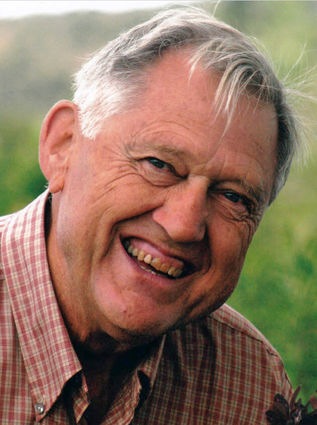 Garth A. Bricker, longtime resident and veteran teacher, died peacefully at the age of 88, June 13, 2020, at the Fallbrook Gardens Residential Care Facility.

Those who knew him, will remember a man that always had a smile on his face and a quirky-happy and pleasant innocence about him. He was a gentle giant of a man.

Many longtime residents knew him as "Mr. Bricker," as they or their children had him as their fourth or fifth grade teacher. His fascination and passion for earth sciences and his devotion to the field of rock, gem and mineral collecting was a driving influence in his teaching.

His students were regularly treated to a myriad science projects and discoveries. A highlight for many was the day the class was treated to fried rattlesnake. To this day Mr. Bricker's former students still cast fond memories of the learning and adventure in his classrooms.

Garth was an avid rock hound, and some would say it was his life's blood. Being a schoolteacher, he would use his holidays and summer vacations to take his family on rock hunting-centric "vacations" all over California and neighboring states.

His every free moment was devoted to gem and mineral study and collecting. He had a sixth sense about locating the right spot to dig and could dig for hours straight. He would move mountains of dirt and rock in his quest for a certain mineral, whether it was a huge specimen or the smallest crystal that could only be seen through a microscope.

His children remember many occasions where he would come back to camp after a day of digging and all that could be seen was the whites of his eyes and his white teeth, through that permanent smile. He seemed to almost always find his quarry, returning with boxes of excellent mineral specimens, very carefully wrapped in miles of toilet tissue. It was his happy place. His children are forever grateful for being exposed to these experiences and for his instilling in them a passion for the outdoors, camping, nature and discovery.

Garth was born Dec. 28, 1931, to Arnold and Ruth Bricker (Gates) in Washington. His father was a pharmacist mate with the Navy and his mother was a schoolteacher. His mother's family traveled here by covered wagon and settled in Modesto. Being a Navy family, his parent's home base was Berkeley, but they lived in Washington; Brooklyn, New York; Hawaii and, ultimately, in Fallbrook, where they settled.

Garth met his wife, Janice, in 1948, and their first date was a drive to a local rock collecting location. Garth attended San Diego State University for two years and they married in 1952. He and Janice moved to Los Angeles where he attended University of California Los Angeles, graduating with a bachelor's degree in education and a minor in geology.

In 1954, Garth joined the army, returning to Hawaii where he was stationed until 1956. After his service, he was hired by the Poway Unified School District as a provisional fourth grade teacher and then accepted a teaching position at Fallbrook Union School District beginning in 1959. He earned his master's in education from San Diego State University, while teaching in Fallbrook.

His love of rock hunting, along with his geology education, led him to become the curator of the Fallbrook Gem and Mineral Museum for many years, which he thoroughly enjoyed.

Garth's legacy will live on in his students and in the tireless contributions that he made to the rock, gem and mineral collecting community.

Donations are being accepted in his honor to the Fallbrook Gem and Mineral Society.