Everything is new but the name at Café des Artistes 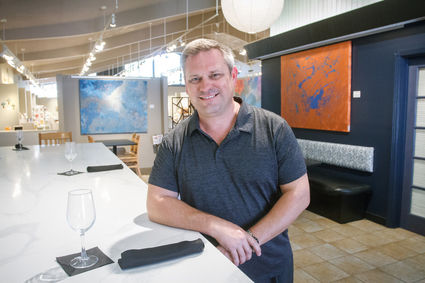 Scott Anders is the new owner of Café des Artistes.

In case you were wondering, Scott Anders knows all about the restaurant business.

"I've been in restaurants my whole life," Anders said. "I'm 45, so, since high school. My parents had one. When I was in grade school, my grandparents owned one franchise, Lum's, that used to be popular back in the 60s, 70s and 80s. I have many, many friends from the restaurant business that have their own back in St. Louis and in L.A. I've done everything from fast food management to fine dining to bars and clubs, the whole gamut. But this is the first one I've owned outright."

Anders and his wife Lori are the new owners of Café des Artistes in Fallbrook, taking over for longtime owner Michael Calvanese who handed over ownership, April 10.

"I've been in Fallbrook for seven years," Anders said. "Me and my wife, Lori, before this, we were renting an apartment in Redondo on the ocean. I'm originally from St. Louis and my wife's originally from Hawthorne. We met, moved back to L.A., rented the apartment on the beach and started looking for a home or a business. Eventually, we found a home in Fallbrook.

"We started looking, I think, at the property back in February. We thought about it, talked about it, looked at pros and cons, and decided to make an offer. Negotiation took a little while, we worked out an offer and worked out our lease with the arts center and went into escrow," Anders said.

Because of the coronavirus pandemic, the escrow, ABC transfer and health department licensing took longer than they anticipated, he said.

"(They) were working a lot from home and were short-staffed," Anders said. "We eventually closed, of course, and took over. I've been in there for the last couple of months overseeing all the remodeling with contractors and painters and carpenters and electricians.

"Everything's pretty much new except for the name and even the name and logo were redesigned. We put a nice long L-shaped bar in there. It's white quartz," Anders said.

According to the new website, the cafe is "for celebrating art in food and art in life with a European flair."

Anders said there are some similarities between the new menu and the old Café des Artistes menu.

"There are some similarities as it's a small kitchen," he said. "We don't have a deep fryer; it is still hot and cold sandwiches. It is salad, soups and desserts as formerly described. But we have all new bread. The paninis are the superstar, but it's herb focaccia and it's kind of oily and it just grills very well. We have a sourdough, which is vegan for our cold sandwiches. We have gluten-free options as well in the bread. All our cold sandwiches can also be wrapped. Our house soup is a lentil, which is vegan and gluten-free, and very popular and very good. And then we have a daily soup of the day, and that varies."

Of course, taking over a business in the middle of a global pandemic and having to deal with mandates and orders coming down from county and state health officials isn't exactly ideal.

But Anders said they are rolling with the punches.

"Yes, it's tough, we don't know if they're going to close everything down for indoor dining next week or not," he said. "I've got a few ideas if I have to improvise. The last couple of days were a little slow, but I think going into a holiday weekend, along with COVID-19 lingering has maybe deterred some people, but we did very well on our opening weekend. We've got a lot of positive feedback. Everyone seems to be very excited about it. We're hearing nothing but good things for feedback and the art center is telling us the same thing." 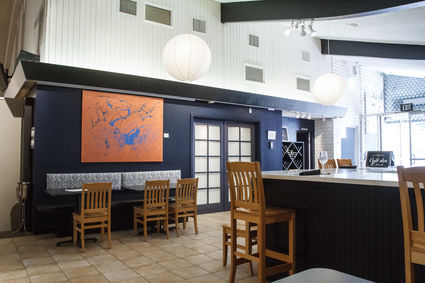 Café des Artistes is open Wednesdays through Sundays from 10:30 a.m. until 3 p.m., but from Wednesday through Saturday, they are doing a small plate, beer and wine early bird happy hour until 4 p.m. On Sundays, they close at 3 p.m.

Anders said he hopes people will give the new version of the restaurant a shot.

"The first thing to know is the only thing that is the same is the name," he said. "You're going to find everything's changed. Other than that, as far as the way it looks, the feel of the energy, the music, the service, the quality of the food, the kitchen's moving quickly, the food's coming out. The quality I think is something I'm proud of."