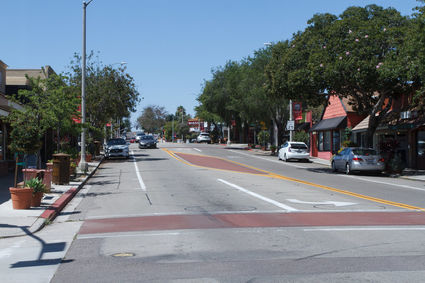 Main Avenue from Hawthorn to Fig streets will be closed Fridays from 4-8 p.m. to allow businesses to operate on sidewalks or the streets, in an effort to expand social distancing guidelines, starting July 10.

If all goes well and a surge of new coronavirus cases hitting the county calms down, some downtown Fallbrook businesses could have the opportunity to spread out a little in hopes of bringing more business to the area.

According to Lila MacDonald, CEO of Fallbrook Chamber of Commerce, Main Street will be closed from 4-8 p.m. Fridays allowing businesses on the route to expand out into the street.

The road will be closed from Hawthorn to Fig streets with Alvarado Street remaining open for through traffic to Mission Road, mainly to help San Diego County sheriffs from the Fallbrook substation navigate the area.

"This all started actually in San Diego County when they were closing Little Italy, different neighborhoods down there, and we were contacted because we're unincorporated," MacDonald said. "We're kind of the pilot program for unincorporated areas and we're going to try it. The idea is basically to expand the footprint of restaurants and businesses because they're at 50% capacity now.

"Now, obviously our downtown is a little bit different from Little Italy where there are tons of restaurants and stuff like that. A lot of people want it closed permanently, but downtown businesses have asked if it could be closed and be more of a walking, pedestrian-friendly (area). This is a good pilot to see if that works," she said.

MacDonald compared the plan to what Little Italy or Old Town Temecula is doing, rather than what Carlsbad has in their downtown area.

"The plan is to close down a couple of nights a week and allow the businesses on Main, if they need to or would like to, put tables outside, like in Little Italy, they actually put it into the street," she said.

MacDonald said that while Carlsbad has patio dining, the structures are more permanent.

"(Little Italy) didn't actually build structures like in Carlsbad because in Carlsbad that's how it is permanently, but they put out tables and delineate an area where you could go get a beer and food at the brewery or go to Small Town and get food," she said. "And then the shops will stay open later for people until 5 p.m. and they don't really get that opportunity to do that.

MacDonald was quick to say that the closure does not mean that there's an event being held.

"It's not an event, the county is really clear about that," she said. "Meaning, we can't have a band and we can't have outside vendors. If (a business is) not in that area, we can't bring you in as of now. Once they start allowing events, we can make it more like Hot Summer Nights, where we can bring in other outside Fallbrook crafts or restaurants or beer and wine.

"Right now, it's just set up because of COVID-19 to allow them to expand their footprint," she said.

MacDonald said the chamber is working on a map to share with visitors, encouraging them to expand their shopping and dining beyond the closed streets.

"We're also going to be including a downtown area map of all the other restaurants in the area," she said. "You might choose to come down here and shop, but then maybe you want to go to whatever is in the area to eat that's within walking distance. We want everyone to shop local, not just in this area, but we figure if we can get people downtown, then maybe they'll look at everything else," she said.

MacDonald said they have heard concerns about traffic being diverted in the area, but she said the businesses are pretty much all on board.

"We've heard concerns of, 'How am I going to get to work?'" she said. "It's pretty easy to get around here. We're only one street over and you're on Mission."

She also made it clear that everyone should adhere to mandates about wearing masks and social distancing.

"Having said that, if the state or county decides that they're closing more down, then this is also fluid too and can change as well," she said. "It could be (a situation) where they say, 'We're not going to start until August because now everything's shut down until August.' You know, I don't know what the state's going to do," she said.