Kidding around is part of business at Smog Bros, but make no joke about guarantee of $5 for recheck 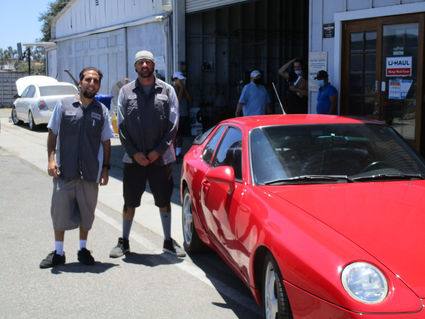 Smog Bros partners Moe Elfarra, left, and Josue Gonzalez pose with a car that just passed its smog test at their shop.

Don't expect a full-on comedy routine, but when Fallbrook drivers get their state smog certificate from Smog Bros, they should be prepared for a good laugh while spending the 15-30 minutes having their vehicle checked.

Owners Moe Elfarra and Josue Gonzalez believe having a sense of humor is something to be appreciated. By making a customer comfortable, they said they hope to have repeat business. Apparently, their plan is working. They've been in business for 13 years, coming up on seven years at the current location at 418 W. Aviation Road in Fallbrook.

"We both grew up in Fallbrook and having longtime friends and associates helped grow the business when we started," Gonzalez said. "To keep them coming back, we also had to offer good service. The humor is just something extra."

It fits their personality and helps them enjoy work, they said.

"There's something else we're also really known for," Elfarra said. "It's our $5 price for a recheck should their car fail the test. No one else gives that discount that we know, most charging $50 for a recheck. We've saved our customers thousands of dollars over the years, and they really like it."

Elfarra showed an example of his humor during the interview. When I asked if it was a satisfying job, he replied, "Well, it's not my dream job – of being a male stripper – but I don't have the body for it."

When asked another routine question about why they opened the shop, he replied, "To keep the environment clean."

Then his humor returned, and he added, "It was my partner's idea."

The partners also look out for the best interest of their customers, they said. They accept coupons from other smog stops in the area, and both partners offered the same advice about having a vehicle pass the test – "Keep it maintained."

Older cars are more difficult to pass, the owners said, and once in a great while they will encounter a car that just won't pass. It's rare, but Elfarra said when that happens, they will sometimes delicately inform the owner of the state's program of paying up to $1,500 for a "clunker." It may be a helpful option when it may be too costly to have the engine brought up to standard, they said.

Elfarra explained he's careful about telling people their car may be a clunker because vehicles are so personal.

"I've lived here my entire life – I've never moved away – because there are so many connections here," Gonzalez said. "You really get to know people here."

"It's a small town with good people," Elfarra said, whose parents have owned Happy Jug Liquor for decades.

Elfarra said his greatest satisfaction at work is seeing a customer's happy face when they hear their cars passed the smog test.