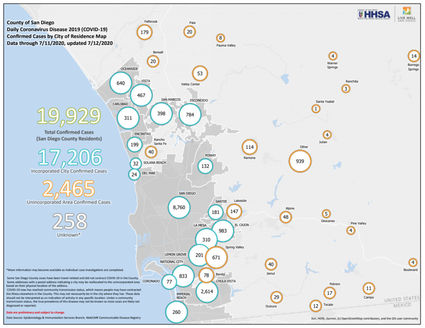 SAN DIEGO (CNS) - The number of COVID-19 cases in San Diego County passed 20,000 Monday as health officials prepared for major changes in the way the region will handle the pandemic.

The number of cases is now at 20,348 and the death toll remains at 422 countywide. Of the 6,542 tests reported Monday, 6% returned positive, in line with the 14-day rolling average.

As of Monday, both Bonsall and Pala have reported 20 cases in each community while Fallbrook reported 179 reported cases.

Additionally, the smoke from the fire on the USS Bonhomme Richard at Naval Base San Diego could cause potential health problems for those most susceptible to COVID-19, including the elderly and those with heart or lung conditions, health officials said. Supervisor Nathan Fletcher asked residents who smell smoke or experience eye irritation to remain indoors with doors and windows closed and to avoid strenuous exercise.

Nick Macchione, San Diego County's director of the Health and Human Services Agency offered some more bad news Monday when he reported the county's COVID-19 testing capacity was stretched to its limit. Local biotechnology company Helix did announce a partnership with the county to provide 2,000 tests a day with a 24-hour turnaround for the foreseeable future, but supplies both locally and nationally remain critically low.

``I'll be clear and frank, it's not a testing windfall,'' Macchione said of the partnership.

Although the county has averaged more than 8,000 tests per day over the last week, a shortage in testing supplies has stretched supply lines to the limit, County Supervisor Greg Cox said.

Before the partnership with Helix, Macchione said the county was seriously considering doing what some other jurisdictions in the country have done and close state- or county-run testing sites to better consolidate resources. For now, the county can keep all testing sites open and all existing appointments for tests on the books, but both Macchione and San Diego County Public Health Officer Dr. Wilma Wooten explained the county would shift testing priorities back to those showing symptoms and those most at risk for the illness, including the elderly, first responders and those with underlying health conditions.

No new community outbreaks were reported Monday, but the weekly total -- 17 -- is still well above the county's metric of no more than seven in a one-week span.

About 137 of every 100,000 San Diegans are testing positive for the illness, well above the state's criterion of 100 per 100,000. Total COVID-19 hospitalizations have inched up over the last several weeks and now sit at 467, 159 of which are in intensive care units.

``The pandemic is not over,'' Wooten reminded county residents last week. ``The disease is still widespread in our community, as evidenced by the rising cases.''

Among those testing positive last week was star jockey Flavien Prat, who was diagnosed with COVID-19 before this weekend's horse races at Del Mar, according to Del Mar Thoroughbred Club officials.

Prat was tested at Scripps Clinic in La Jolla around noon Sunday after returning from a riding assignment in Kentucky. The 2019 Kentucky Derby winner was removed from all the mounts he was set to ride on Sunday and will quarantine at his home for at least 10 days.

Del Mar requires all riders traveling from other jurisdictions to be tested before they race and will test all jockeys and jockey room personnel before its next day of racing on Friday.

``We will continue to be vigilant to ensure the safety of the people who work here and live in our community,'' Del Mar CEO Joe Harper said.

``This statewide one-size-fits-all approach to closing entire business sectors is misguided, as evidenced by the many sectors in San Diego forced to close their doors again despite not having contributed at all to the rise in our local cases. As such, we are requesting the review of our county's data to take place as soon as possible, thereby allowing San Diego businesses to reopen if appropriate,'' they wrote in the joint letter.

``It is time to give local control of this public health emergency to the elected leaders and clinical team closest to the people so that we can begin community specific healing based on local data. We are confident that San Diego County is well-positioned to serve as a model in this effort,'' the letter said.