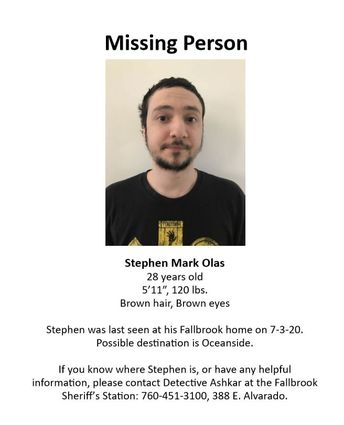 The San Diego County Sheriff's Department on Thursday confirmed they are still searching for a missing Fallbrook man who was last seen nearly two weeks ago.

Stephen Olas, 28, was last known to have been at his Fallbrook home on July 3.

The sheriff's department believes he may possibly have been headed to Oceanside.

Olas was described as 5 feet 11 inches tall and 120 pounds, with brown hair and brown eyes.

Sheriff's deputies asked anyone with information on Olas' whereabouts to call the Fallbrook Sheriff's Station at 760-451-3100.