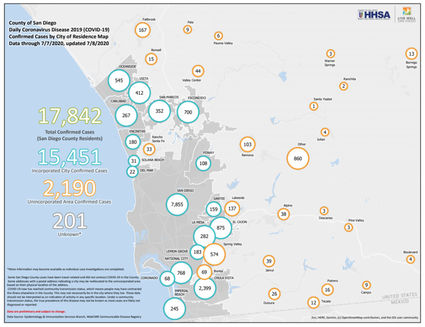 Of the 8,950 tests reported Wednesday, 6% returned positive. A total of 411,444 tests have been completed in the county. An average of 7,497 tests have been reported in the last week, and the 14-day rolling average for tests returning positive is 6%.

Of the nine people whose deaths were reported Thursday, five were men and four women. They died between June 27 and July 7 and ranged in age from 50 to 89. All but one had underlying medical conditions.

A record-high 578 cases, a 10% positive test rate and 12 deaths were reported Tuesday.

Despite the comparatively lower numbers on Wednesday and Thursday, other signs show the pandemic is far from easing. A new daily high of 38 COVID-19 positive patients were hospitalized in Wednesday's data, and about 136 of every 100,000 San Diegans are testing positive for the illness, well above the state's criterion of 100 per 100,000. Total COVID-19 hospitalizations have inched up over the last several weeks, said Dr. Wilma Wooten, the county's public health officer.

There have been 1,974 people hospitalized due to the illness, 10.7% of those who have tested positive. Of those, 525 or 2.9% had to be admitted to an intensive care unit.

``The pandemic is not over,'' Wooten reminded county residents on Wednesday. ``The disease is still widespread in our community, as evidenced by the rising cases.''

``This statewide one-size-fits-all approach to closing entire business sectors is misguided as evidenced by the many sectors in San Diego forced to close their doors again despite not having contributed at all to the rise in our local cases. As such, we are requesting the review of our county's data to take place as soon as possible, thereby allowing San Diego businesses to re-

open if appropriate,'' they wrote in the joint letter.

``It is time to give local control of this public health emergency to the elected leaders and clinical team closest to the people so that we can begin community-specific healing based on local data. We are confident that San Diego County is well-positioned to serve as a model in this effort,'' the letter said.

A new community-based outbreak was reported Thursday in a bar/restaurant. A total of 10 cases "fell off'' the weekly metric Thursday, bringing the total number of community outbreaks over the last week to 15, well over the county metric of seven outbreaks in seven days. A community outbreak is defined as three or more COVID-19 cases in a setting from different households.

San Diego Harbor Police announced Wednesday that three of its patrol officers recently tested positive for the coronavirus. Two officers tested positive Tuesday and one Wednesday. All three officers, whose identity's were not released, are in isolation at home.

As the county continues grappling with the current health crisis, County Supervisor Nathan Fletcher reminded the public that officials are also looking toward the future.

On Tuesday, the County Board of Supervisors approved several COVID-19 relief programs, including a $17 million business stimulus package and more federal CARES Act support for essential employee childcare. The board also considered COVID-19 testing in schools, a situation that may become pivotal as the beginning of the school year approaches. Fletcher said that since March, more than 600 childcare businesses have shut their doors.

``Are we tackling a health crisis or an economic crisis? The reality is that you have to do both,'' he said Wednesday. ``If there is no childcare and no school, there's no reasonable expectation that people can go back to work.''

For the new public health order restrictions put in place Tuesday, outdoor dining will still be permitted for restaurants, as will delivery and takeout. The restrictions will be in place for at least three weeks.

The decision to nix indoor operations at restaurants, bars and breweries is in line with restrictions imposed last week by Newsom on counties on the state's coronavirus monitoring list, which now includes 23 counties. San Diego County was added to that list Friday.