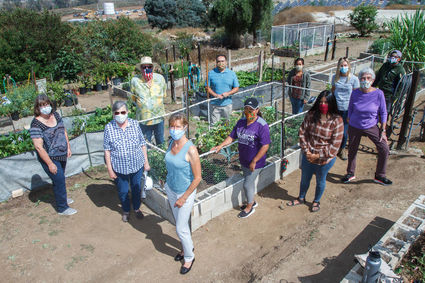 Many of the Fallbrook Community Garden's advocates, residents, stakeholders and governmental agency personnel got together July 8 to have a brief face-to-face "masked and socially distanced" meetup to celebrate the garden's revitalization.

Among the many people present were the following advocates: Davide Herrera, Ricardo Favela. Stephanie, Jasmine and Leslie Ortiz (sisters and all members of VOCES/human rights advocates), Marisela Lopez and Ely Ortiz (their parents) and other community advocates who have been deeply involved in making the garden flourish again.

They told two friends and, through word-of-mouth and social media, propelled the garden to its current actively blooming green status.

As described by Stephanie Ortiz, the community garden activist group itself is made up of a community organizing core which has been around for several generations. VOCES de Fallbrook (Voices of Fallbrook) is an intergenerational, multicultural grassroots organizing group which has worked with the Fallbrook Human Rights Committee and includes people from many walks of life and countries of origin who see Fallbrook as their beloved home.

Some members of VOCES are teachers, parents and community members. Ortiz said, "The aim was to rescue and sustain the garden since it is nestled in a predominantly low-income neighborhood which is caring and residents have been recently affected by many difficult circumstances in our world.

"It is a good opportunity to begin (and continue) our multicultural and appreciative dialogue through food, customs, conservation, reverence for the land and cultural exchange. As members of a long line of agricultural growers we are the first to not follow that tradition. We must embrace, retain and carry on those traditions to honor our family. We are looking forward to creating and sustaining a green space for and by us which is safe and clean and healthful."

Ortiz also saw this as an opportunity to continue the necessary work allowing us to work for the goodness of Fallbrook.

Ricardo Favela has been a stakeholder in VOCES de Fallbrook who said they wrote a book titled "The Hand That Feeds You" which is available in Spanish and English. Favela is also an appointed member of the County Service Area 81 Local Parks Advisory Committee.

It took some time to generate genuine interest and raise awareness to bring back the garden. Ortiz's parents have been organizing and advocating for Fallbrook's Latino population for several years. Stephanie learned from both parents. Her mother got a petition together for signatures showing a commitment to rescue the garden for its fullest use. Others learned how to request the community garden applications be made available in Spanish too. The hoped-for goal of having all be part of the organizing of the garden's use is very important.

Though the property on which the garden exists is managed by staff members of Mission Resource Conservation District, the property is actually owned by Fallbrook Public Utility District. The garden was established with the goal of residents dwelling in apartments and condos having space to grow their own healthy foods.

Current MRCD regional director Darcy Cook was happy to meet so many people at one location. The State of California's MRCD is a nonregulatory state-funded entity responsible for assisting landowners in how to best use their land, improve the quality and integrity of their land and soil, and judicious use of water as a precious and limited commodity.

The Fallbrook Public Utility District, as the owner of the property, has expressed that it is grateful it is going to good use too. FPUD was well represented by Noelle Denke and Jennifer DeMeo both on hand for the gathering of stakeholders.

"We were more than happy to help, and provide this to the community," said DeMeo, vice president of the FPUD board, who lives in the subdistrict where the garden is located.

"The board made the policy decision and it's a win-win, an easy way to give back since we have the land and it is going to good use – helping to provide the local people's healthy food needs," DeMeo added.

This could have been the first time Fallbrook Community Garden founders from 2007 till current days had a chance to meet residents who have embraced a full tilt desire to rescue the garden. It is not exactly clear how this got fully charged, but it is clear that a Fallbrook English As A Second Language class was the catalyst for bringing the community garden back in 2019.

The ESL class told the FPUD board that they would love to rescue the garden and give it new life, but that those who would benefit most and be most likely to be fully responsible could not afford the $50 per month fee for garden use to cover the cost of water. (The Village News featured an article on the ESL students who had taken action to revitalize the garden in December 2019.)

Arborist, horticulturist and landscape designer Roger Boddaert, The Tree Man of Fallbrook, showed up to share how he created his "garden plot designs" in 2007.

The resident gardeners are happy to report that the nearly 30 plots in varying sizes maintain their functional structure in different sizes based on the needs of the user. Due to a recent uptick in demand there are few plots available, but one can be put on a waiting list.

Also, there for the July 8 meeting was Judy Mitchell, who back in 2007 saw a need. There are founders and builders to every major ongoing project. Mitchell, at that time already a director of the MRCD for nearly 20 + years, was first on our list of introductions as she was the founder of the Fallbrook Community Garden project. Mitchell said she was pleased to see so many invested partners since the space was first provided.

Members of the Fallbrook Land Conservancy and two of its committees, Save Our Forest and The Native Plant Team, are grateful to leaders at FPUD, MRCD and FLC for identifying this garden space and then making it available for the environmental plantings on premises which allow them to continue their environmental education program in Fallbrook schools.

Save Our Forest founder Jackie Heyneman said during introductions, "We at SOF are grateful that FPUD and MRCD have both been willing to work with us and have supplied a location for our plantings which we will use to teach our area school kids. We began in 2004 and it is wonderful to have watched it grow. It is wonderful to meet Fallbrook's community garden enthusiasts in person."

The meeting broke up and yet the informal conversations continued on for some time afterward. Those who were representative of the Latino/Latina community had many people asking for information and saying thank you for reinvigorating the community garden concept. There was also an opportunity for those who are primarily English speakers to have translation help.

It was clear that everyone there was focused on making Fallbrook's Community Garden a sustainable success for some time to come. 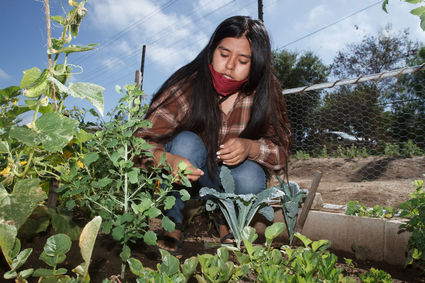 Jasmine Ortiz, a Fallbrook resident who lives along Alturas Road, tends to her vegetable plants at Fallbrook Community Garden, which offers individuals space to grow their own produce.