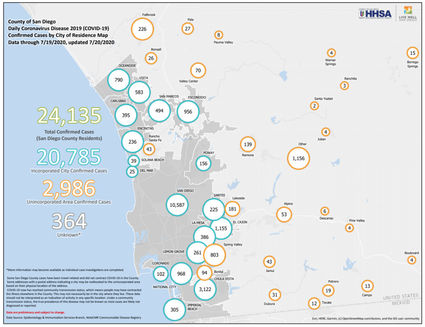 Monday's number marked the fewest new cases since July 15, when there were 409, in what was the worst week since the start of the pandemic. Between July 13-19, the county also reported the most hospitalizations -- 163 -- and the most deaths -- 56 -- in any one-week span since COVID-19 began spreading in the U.S. in March.

Bonsall reported 26 cases, Pala reported 27 (five more than yesterday) and Fallbrook reported 226 cases of coronavirus on Monday, 14 more than were reported on Saturday.

The number of coronavirus fatalities remained unchanged at 478 on Monday.

Board of Supervisors Chairman Greg Cox said he understands the frustration with wearing masks, social distancing and other precautions aimed at keeping the virus from spreading, ``but refusing to take these steps is just going to prolong'' the situation.

``We implore you to not wait for someone you care about to lose the fight against COVID-19 before you take action,'' she said.

Wooten said the massive spike in cases began to occur after bars, hotels and gyms reopened on June 12.

While no new community outbreaks were identified Monday, in the past seven days there have been 16. The number of community outbreaks -- defined as three or more COVID-19 cases in a setting and in people of different households -- remains more than double the trigger of seven or more in seven days.

A total of 107 community outbreaks have been reported since the pandemic began, with 33 in June and 47 so far this month.

A total of 4,440 patients are in the county's hospitals, nearing the 80% bed occupancy of 4,902, which would raise some alarm bells as to the county's ability to handle COVID-19 case surges.

The last metric the county has failed to maintain is the percentage of cases that have been handled by a contact investigator within 24 hours of being reported. There are more than 500 investigators employed by the county, and although 98% of all cases had been investigated in that time frame as recently as June 25, that rate had dropped to 8% as of Monday. The county

Wooten said that in response, the county is attempting to hire more contact investigators, with 97 set to come on board Friday and another 212 in the hiring process.

The number of cases continues to rise in people between the ages of 20 and 49 and particularly in people in their 20s, prompting the county to aim efforts at educating younger people.

Residents between 20 and 29 years old account for 25% of the county's cases, the highest percentage of any age group, according to county data. The next highest group are residents between 30 and 39 years old, representing 19.1% of cases.

``While it's true that the mortality for younger people is lower, it's also true that the rate is not zero,'' said Dr. Scott Eisman, a

pulmonologist at Scripps Memorial Hospital Encinitas. ``The complications from this illness are far greater, much longer lasting and far more serious than the flu.''