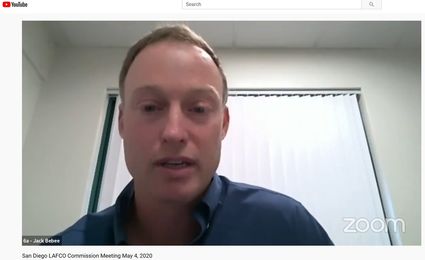 FALLBROOK – Leaders from the Fallbrook and Rainbow water districts participated in this week's initial meeting of a committee that will advise the San Diego County Local Agency Formation Commission on the two districts' desire to detach from the San Diego County Water Authority and join a nearby water district where they can purchase water at a big savings to ratepayers.

"This was a good, productive first meeting," said Jack Bebee, general manager of the Fallbrook Public Utility District of Monday's virtual online discussion. "Through the guidance of LAFCO staff, a clear path was established about how we get from point A to point B when the LAFCO board votes on our proposals next year."

Among other things, LAFCO staff indicated that, based on their initial assessment, the environmental review process should be fairly straightforward.

"We agree with their initial assessment that completing an Environmental Impact Report does not appear appropriate in this case," said Bebee. "We aren't making any physical changes to the environment and will be receiving the same water from the same pipeline. The California Environmental Quality Act does not require an EIR under the circumstances presented."

By joining Eastern, the two districts estimate they could save ratepayers between $8-10 million a year collectively. Right now, the Authority charges its member districts more than $1,700 per acre-foot for water. By contrast, Eastern would charge FPUD and Rainbow only around $1,200 per acre-foot. A significant number of ratepayers in the districts are agricultural users for whom the price of water is critical to the viability of their businesses.

At next month's meeting, the committee will take up two important issues – cost allocation and water reliability.

"We've analyzed both of these issues," said Tom Kennedy, general manager of Rainbow. "And the detailed technical analysis concluded that our leaving the Authority would have only a minuscule financial impact on the remaining ratepayers – just pennies a month – and will not increase reliance on the Bay-Delta."

"We look forward to sharing the results of our analysis with the committee and hearing from the Authority about the specific concerns they have," said Kennedy.

In March, both FPUD and Rainbow submitted their detachment applications to LAFCO, which is comprised of local elected and appointed officials and is responsible for overseeing the establishment, expansion, and boundary changes of cities and special districts, including water districts.

Kennedy says FPUD and Rainbow have become "donor districts" in which they pay for the Authority's infrastructure and facilities that serve agencies to the south, but don't receive the same benefit from them. 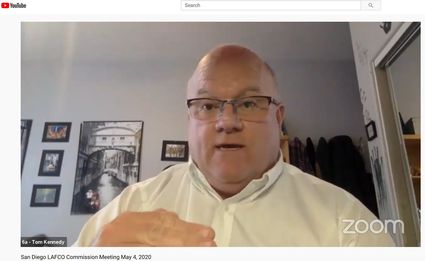 "Due to our unique location in North County, we can serve our customers without using the Authority's pipelines and other infrastructure, so subsidizing those facilities at the expense of our customers should not continue," said Kennedy.

The 10-person committee, which was formed by LAFCO last month, includes representatives from the County of San Diego, San Diego Association of Governments, San Diego County Water Authority, as well as the two districts seeking detachment, FPUD and Rainbow.

LAFCO is expected to vote on the matter sometime next year. If approved, a vote of registered voters in the Fallbrook and Rainbow districts would then take place.