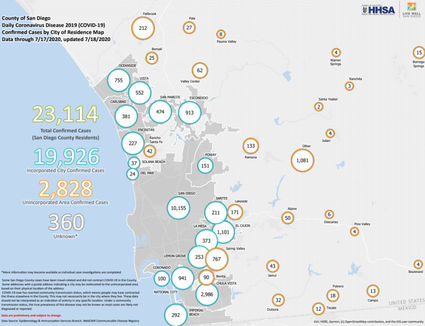 SAN DIEGO (CNS) - The number of daily COVID-19 cases in San Diego County has crossed 600 for the second time as the number of total cases rose to 23,114.

Of the six deaths, four were women and two were men. They died between July 8 and 16 and ranged in age from 60 to mid-90s. All had underlying health conditions.

Bonsall reported 25 cases, Pala reported 27 (five more than yesterday) and Fallbrook reported 212 cases of coronavirus on Saturday, 15 more than were reported on Friday.

The county recorded 10,290 tests Saturday, 6% of which returned positive. Saturday's test numbers were the second-highest numbers reported, trailing only Friday's figures. The 14-day rolling average is now 6%. The state's target is below 8% positive test rate.

The last metric the county has failed to maintain is the percentage of cases that have been handled by a contact investigator within 24 hours of it being reported. There are more than 500 investigators employed by the county, and although 98% of all cases had been investigated in that time frame as recently as June 25, that rate has dropped to a dismal 37%. The county metric is to reach 71% of new cases in a day's span.

The free, drive-up testing site is in the parking lot of Mar Vista High School, at 505 Elm Ave. The site will offer up to 185 appointments per day.

This new location brings the total number to six testing sites in South County and is part of the County's South Bay Saturation strategy. Additional testing sites are located in San Ysidro, two in Chula Vista and two in National City.

The number of cases continues to rise in people between the ages of 20 and 49 and particularly in people in their 20s, prompting the county to make efforts at educating younger people.

San Diego residents between 20 and 29 years old account for 25% of the county's cases, the highest percentage of any age group, according to county data.

``While it's true that the mortality for younger people is lower, it's also true that the rate is not zero,'' said Dr. Scott Eisman, pulmonologist at Scripps Memorial Hospital Encinitas. ``The complications from this illness are far greater, much longer lasting and far more serious than the flu.''

Eisman also said heart attacks, strokes and serious blood clots were increasing among younger people confirmed to have COVID-19. A total of 58% of those confirmed to have the disease in the county were between the ages of 20 and 49.

The Del Mar Thoroughbred Club canceled its racing program for Saturday and Sunday after 15 jockeys recently tested positive for COVID-19. Racing is slated to resume July 24.