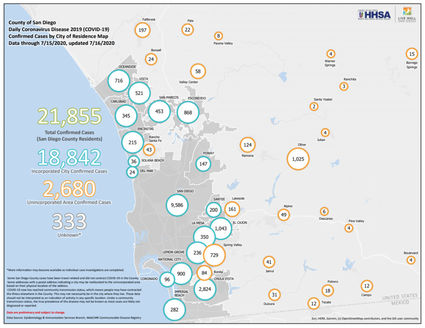 SAN DIEGO (CNS) - The number of daily COVID-19 cases in San Diego County crossed 600 for the first time Friday as the number of total cases rose to 22,489.

Of the seven deaths, three were women and four were men. They died between July 7 and 15 and ranged in age from early 50s to late 90s. All had underlying health conditions.

The county recorded 9,224 tests Friday, 7% of which returned positive. The 14-day rolling average is now 6.1%. The state's target is below 8% positive test rate.

Two new community outbreaks were reported Friday, bringing the weekly total to 13 -- well above the county's metric of no more than seven in a one-week span. The new outbreaks were both reported in restaurants.

The last metric the county has failed to maintain is the percentage of cases that have been handled by a contact investigator within 24 hours of it being reported. There are more than 500 investigators employed by the county, and although 98% of all cases had been investigated in that time frame as recently as June 25, that rate has dropped to a dismal 37%. The county metric is to reach 71% of new cases in a day's span.