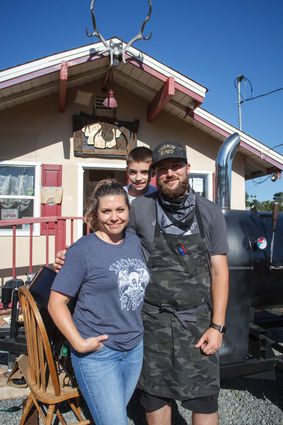 The owners of the new Smokin Bird BBQ restaurant in Fallbrook are Dan Pundik, right, and his wife, Jillian, seen with son Noah, 11. Not pictured is their youngest son, Dylan, 8.

According to chef Daniel Elliot, it was just time for him to open his own restaurant.

Elliot has been a chef in and around San Diego for about 15 years, working at places such as Rancho Valencia Resort in Rancho Santa Fe, later taking over at Local Tap House in Oceanside.

"With COVID-19 and all that stuff going on, I was grinding over there and doing everything, and I just said, 'You know what, I can do this on my own if I find a place,'" he said. "I looked at it just as a good opportunity."

When he found out that Jonathan and Jennifer Arbell, owners of Oink and Moo Burgers & BBQ, were getting out of the restaurant business, Elliot said he reached out.

"(We) worked out a deal with them ... I have a business partner and he purchased the building and I have the lease and the rest was history," Elliot said. "Now I'm here. I'm still a part of LTH kind of helping them transition, without me there, but I'm trying to just be here and run my own restaurant."

"We're doing Texas barbecue, all served fresh right now," Elliot said. "We will open for lunch eventually and brunch on the weekends. We're going to do like a bottomless mimosa, fried chicken, brunch kind of deal.

"We just want to feed the community. I try to keep prices super affordable and make it so you can come here more than once a week and grab some food real quick. It's a quick service.

"You walk up and order and grab your beer. You get a number; it buzzes when your food's ready to come back and get it. It's real casual. We're allowing dogs in there, and we want families. The whole patio is COVID-19 friendly, 6 feet apart. It's all an open patio, so it's pretty cool," Elliot said.

When the food is ready, diners will grab a big metal tray and head back to their spot to sit, so essentially, it's a little like a food truck/food hall vibe.

Elliot said it was also important for his restaurant to use as many local vendors as possible in the food.

"Most of the vegetables are from Cyclops farms," he said. "They are a farm that is located in Fallbrook and Oceanside. Right now, we have his dragon tongue beans and his carrots on our menu."

Elliot said the menu would be seasonal.

"We're going to keep it seasonal – it's all barbecue style, so, sides and meat – but as the seasons change, we're going to change those things up," he said. "We plan to grow the menu as we grow the staff. And right now, it's my wife and me, you might see my kids running around with masks on in the restaurant. We're trying to just start a business and do something simple."

Elliot, his wife and children have lived in Fallbrook for some time now.

"We looked out here. I have two kids and we're family-oriented, and we were looking for a family community, a little more laid back," he said. "I was working in Oceanside and it was stressful, working in Oceanside and living there. It's just hustle and bustle over there by the beach. And we knew that we wanted to live like closer to a mountain or the hills or something like that.

"We have a lot of friends out here in Fallbrook, and we just started reaching out to them. They're like, 'Yeah, move out here and look at a house on our street.' The next thing we knew we were moving to Fallbrook and we love it. It's a great little community. It's a cool little town and I'm hoping that it'll only grow as far as the culinary side of things go," he said.

Smokin' Bird BBQ is at 121 N. Pico Ave. in Fallbrook. Visit https://www.facebook.com/Smokinbirdbbq/ for more information as the business opens more and more.