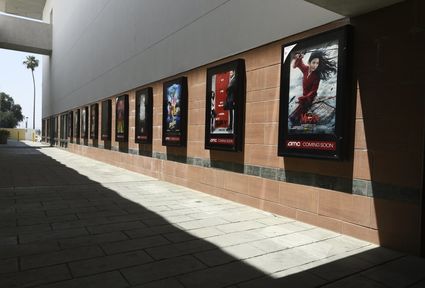 Posters for upcoming movies are displayed in an empty corridor at the currently closed AMC Burbank Town Center 8 movie theaters complex on April 29, 2020, in Burbank, Calif. After several false starts, the film industry is hoping to bring new releases back into movie theaters in late August. But for blockbusters, it may mean rethinking opening weekend and returning to a more gradual rollout through international and U.S. territories. Gone for now are the days of massive global openings. And theater owners say if they don't get new films soon, they may not make it to 2021. (AP Photo/Chris Pizzello, File)

NEW YORK (AP) - A long time ago in a pre-COVID universe far, far away, blockbusters opened around the globe simultaneously or nearly so. In 1975, "Jaws" set the blueprint. Concentrate marketing. Open wide. Pack them in.

Since then, Hollywood has turned opening weekends into an all-out assault. Staggered rollouts still happen, of course, but the biggest films are dropped like carpet bombs. Anything less risks losing the attention of moviegoers. Global debuts north of $300 million became commonplace. Last year, "Avengers: Endgame" made well north of $1 billion in a c...